Anders Lindskog, was born in 1940 and died in August 2008. He was one of Sweden's great tenor sax players, a swing musician of our times with undertones of sorrow and pain and an expressive style reminiscent of Lester Young, Charlie Parker, Gene Ammons and Stan Getz.

"My interest in music started when I was around ten years old, my mother was a good piano player, and we had a small, but quite good record collection at home although I listened mostly to the radio. - It was jazz that really turned me on. Among those recordings was Duke Ellington's "Caravan". I think I was eleven or twelve when one day I played it and discovered that the sound was so different, so excit-ingly different. This was not the way classical music used to sound...the pulsating rhythm ...But it was a mystery to me how they did it and I had nobody to explain it to me. Then I started going into town to see if I could find anything more of that sort and one-day the guy in the record shop suggested that I listen to Woody Herman's recording of "Four Brothers". That really hooked me..."

In the mid-fifties records became more numerous, there were radio broadcasts, and gradually Anders realized that he was in the process of becoming a professional musician. "You know, sometimes I think that it isn't something you just decide. There are circumstances influencing you, and all of a sudden you realize ... well, you're into it... All that music played on the radio and the magazines... I read them over and over. I developed a deep affinity to Stan Getz´ music, not that I forgot Charlie Parker, he was so different, impossible to copy, he still is. ... Sometimes the articles could leave you so confused... giving you the impression that jazz was an intellectual thing. But I must say that Dizzy Gillespie´s visit in 1953 put an end to all that. He showed us that jazz could be about joy and fun and something spontaneous, not the slightest bit academic. If we are not talking about specific instruments Dizzy is still my favorite musician. ..."

From 1960 to 1961 he played in the band of the well-known Danish trumpeter Allan Botschinsky at the legendary venue Vingården in Copenhagen. Back in Sweden, he joined Swing Sing Seven, one of this country's most talked-about jazz and dance bands, where he stayed for some years. Since the 70's he played with Gugge Hedrenius' Big Blues Band and Bernt Rosengren's Big Band - both made up of Sweden's jazz elite. He also freelanced with, among others, American trumpeter Ted Curson's quintet and the Swedish Radio Big Band.

Anders Lindskog has recorded with trumpet legend Rolf Ericson (known for his work with Woody Herman, Duke Ellington and Buddy Rich), and singer Alice Babs. He also worked with Lars Sjösten's Quintet and Maffy Falay's Quintet. In 1975 he made his first LP under his own name (Amigo AMLP 817, long out of print).

In 1983 Anders contracted cancer and had to have his left little finger amputated. "I had a couple of operations and they called me up to come in the next day...I thought that is was all finished and I guess I got into a traumatic state of mind for several months. Then I went to see instrument maker Jonas Näslund who had started an instrument repair shop. So we worked at rebuilding the sax mechanism together and I guess he considered it an interesting challenge. But then came the time when I had to ´unlearn´ all the reflexes that had been in my fingers for most of my life ... that was a hell, I can tell you".

It was not until 1995 that Anders appeared as a leader on a record cover (Cry Me A River, Touché Music, TMcCD 005). When Agneta Baumann was asked to make the CD "A Time For Love" in 1996, Anders was the first musician she suggested to play with her.

In 1994 Anders received a scholarship from Laila and Charles Gavatin's Foundation for Jazz Music and in 1997 he was voted "Swedish Jazz Artist who deserves more attention".

In 1998 he made the CD "Fine Together" (TMcCD 010) with the great Danish musicians, guitarist Jacob Fischer and double-bass player Jesper Lundgaard. 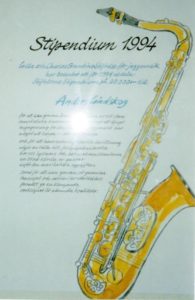