Many have eagerly awaited the release of the first solo CD by singer LINDA PETTERSSON. Touché music have great pleasure in presenting her now in the solo spotlight. Supporting her is a group of four outstanding musicians: Ulf Adåker, trumpet; Anders Persson, piano, Christian Spering, bass and Jonas Holgersson, drums.

As though in response to the album's title "WHO ARE YOU?" Linda has recorded a wide-ranging repertoire to give a broad picture of the many sides of her vocal talent. Not only classic songs from the American songbook such as "Skylark" and "The Folks Who Live On The Hill" are included here, but also compositions from the pens of Kenny Wheeler, Joni Mitchell, Toninho Horta and even Jimi Hendrix and U2! All the songs are given very personal interpretations by Linda Pettersson.

I have come to the conclusion that this CD is among the choice of recordings I would want to take with me to that proverbial desert island. The more I listen the more I find the music growing on me.

On the occasions that I have heared LINDA PETTERSSON "live", whatever the song, she has always succeeded in capturing my attention in an immediate way, and on record (as guest singer on other artists' productions) her contributions have always added a valuable dimension to the proceedings.

Although she is not yet a "household name" in Sweden or abroad, Linda Pettersson has done her fair share of singing during her relatively short career. So, Linda - who are you? Facts concerning Linda's early years leading up to her moving from the north of Sweden to the capital in 1995 can be found, (together with details about every other artist performing on Touché recordings), at www.touchemusic.se.

In Stockholm she began appearing professionally in many different musical circumstances, even on occasions leading her own small group. This lead to a memorable TV feature program in which she sang with a quartet of prominent young jazz musicians. When asked today if she has any particular favourites who she feels have influenced her, she replies: "There have been so many that it's difficult to single out anyone in particular." She has quite simply absorbed the best of what she has heard and it comes out as Linda Pettersson herself, with a voice that has a personality of its own and is easily recognisable.

For my ears (as well as those of many others), in regards to intonation, she is one of the most consistently in-tune singers anywhere today. Just listen to her re-entry after the piano solo in "Detour Ahead", it is simply stunning, and notice that throughout the recording she gives every "little" note, not just the main ones, loving care and attention. However, she says that this side of her technique is not in fact a conscious striving for perfection. In other words it comes naturally to her. In addition she has good control over a large range, which together with her excellent musical "ear", makes technical demands, such as the wide intervals of Kenny Wheeler's "Winter Sweet" with words by singer Norma Winstone, sound playfully easy. In fact it is this ambition with which she willingly takes on (and successfully accomplishes) difficult challenges that has won her much respect among her colleagues in the music profession, including none less than the distinguished artist Alice Babs who praises Linda highly.

It goes without saying that this attitude in the way she approaches her material constitutes in no way a limiting factor to the amount of feeling she puts into each song. Quite the opposite; in applying her own principles of quality she succeeds in heightening the emotional effect, with the use of subtle inflections and nuances instead of exaggerated mannerisms. As of now she creates convincingly moving performances, particularly her interpretations of jazz standards, and contemporary music by other singers and composers in near-related areas of the art.

On this CD Linda has chosen songs not only because of their melodic and harmonic ingredients but because she has a very special feeling for the words, which is hardly surprising as they can be regarded as some of the best and most expressive lyrics in anybody's songbook. We have trumpeter Ulf Adåker to thank for introducing the two Kenny Wheeler compositions to Linda. He also showed her the Joni Mitchell song and the tribute to Jobim by Toninho Horta, which, after a magical piano introduction, is given an interpretation by Linda in her characteristically warm, intimate manner. Ulf's trumpet, mostly with Harmon mute, shines on several tracks and is always completely appropriate to the mood and tempo of the piece.

The rest of the group consists of three more outstanding musicians. Anders Persson once again proves here his artistry by providing a full spectrum of colour to the piano keyboard, with a sensitivity of touch that one normally associates with classical performers. Christian Spering, with his total commitment when performing, has been one of the busiest bass players on the Swedish jazz scene for the past 20 years or so, which speaks for itself. If the description "playing" the drums can be justifiably applied to someone it is to Jonas Holgersson. He can apply the lightest of touches (as he often does here with his skilful brushwork) or he can drive a larger group forward full of power and dynamics. The contributions these four particular musicians provide are all the more remarkable, as they, in the company of Linda, had never before played together in this formation.

With this, the arrival of her first solo CD, we have come closer to an answer to the rhetorical question: Linda Pettersson - Who Are You? Here she demonstrates many sides of her versatility, covering moods from the melancholy "Sad Young Men", and the wistful yearning of "Skylark" to the stark observations of Jimmy Hendrix's "Up From The Skies". Sweden has in Linda a singer of growing stature and it is only a question of time before more and more people are aware of her special gifts. Now with this Touché CD, we have ample opportunity to acquaint ourselves with her voice to a greater degree than ever before. With that in mind it wouldn't surprise me if you also choose this as one of your desert island discs!

CRITICS
Randy McElligott in JazzReview.com:
"Linda Pettersson is a vocalist with a bright future. Following in the steps of other Swedish singers such as Alice Babs, Pettersson's easy going style is sure to appeal to a wide audience. With a great group backing her and a fine selection of material, there is much to enjoy on her debut release."

"Again we have Adaker's beautiful trumpet work adding a richness and velocity that drives the band even further. There are many opportunities along the way for joyful improvisation. Pettersson brings it home with the band. A highlight for sure."

"Pettersson's ability to pull off unique interpretations of what many would consider standards speaks volumes of her as an artist determined to seek her own unique voice. Her band not withstanding, this is a fine debut that hopefully will lead to a more exploratory second release."

Jimi Hendrix Information Management Institute,USA:
"With this, the arrival of her first solo CD, we have come closer to an answer to the rhetorical question: Linda Pettersson - Who Are You? Her solo debut demonstrates many sides of her versatility, covering moods from the melancholy "Sad Young Men", and the wistful yearning of "Skylark" to the stark observations of JimI Hendrix's "Up From The Skies"."

"Her set features a wide-ranging repertoire providing a broad picture of the many sides of her vocal talent. Not only classic songs from the American songbook such as "Skylark" and "The Folks Who Live On The Hill" are included here, but also compositions from the pens of Kenny Wheeler, Joni Mitchell, even Jimi Hendrix and U2! All served up with her own personal touch. On this disc Linda has chosen songs not only because of their melodic and harmonic ingredients but because she has a very special feeling for the words."

"Following in the steps of other Swedish singers such as Alice Babs, Pettersson's easy going style is sure to appeal to a wide audience. In a smoke-free lounge jazz styling, the quartet (trumpet, piano, upright bass, drums) behind her accents her vocal gymnastics." 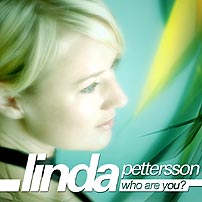