Towards the end of the nineteenth century two very significant forms of "folk music" began to take form and emerge, both on the same continent but separated geographically and socially. One was the tango music of Argentina and the other was the jazz music of the United States.

Both began in environments associated with the poor working classes and in back-street bars. Here the forms are interwoven by musicians with the genuine ability to interpret Argentinean "clásicos" - such as "El Ultimo Café", "Volver" and "Soledad" - with the heartbeat of jazz.

The combining of different music forms has sometimes resulted in the dilution of one or the other and, in some unfortunate cases, both. This, I am very glad to say, definitely does not apply here, for the simple reason that the people selected by the producers for this project are all musicians of unquestionable integrity with a sincere and genuine desire (and ability) to interpret the best of both music forms. Inevitably, to ensure a programme containing as much variation as possible, there are examples where the tango and jazz elements are presented in different proportions to each other, sometimes more, sometimes less, but without endangering the authenticity of the Argentinean source material. A lot of research has been laid down to ensure that the union of tango and jazz will prove to be an enriching and artistic experience.

Laila Gavatin of Touché Music approached Gustavo Bergalli some time ago to suggest a CD production in which this combination would have a free musical forum. Finally, after some unavoidable birth pains, the results are ready, and very exciting they are too.

Gustavo Bergalli, the trumpet player from Buenos Aires, came to Sweden in the mid -70's, and although the life of a jazz musician has never been an easy one, (especially when moving to a new country) Gustavo established himself as one of the very top musicians on his instrument in this country, with an unshakeable reputation as a jazz musician of the highest calibre. He has a wealth of experience behind him, having, for instance, led his own quintet, played with the Swedish Radio Jazz Group and the Stockholm Jazz Orchestra, in the company of many prominent guests such as Bob Brookmeyer, Jim McNeely, Bob Mintzer, Joe Lovano, Maria Schneider and John Scofield, to name but a few. He has also made regular tours all over Europe with several different groups, among them the Klaus Ignatzek Quintet. Over the years he has made many recordings, including four in the role of leader, and several others as featured soloist.

Gustavo's son Facundo has made a considerable reputation for himself in Argentina as an amazingly flexible guitar player, and an all-round musician of elegance, technique and originality. His talents although channelled principally into jazz music, also cover the tango music of his native country.

With Christian Spering on bass and Magnus Gran on drums, two of Sweden's most creative jazz musicians, and Gustavo Paglia, a genuinely authentic interpreter of tango music on bandoneon, the scene was set for a memorable recording session of compositions selected by Facundo from the Argentinian legacy of beautiful music. As you can read elsewhere, the moods are varying, the tempos sometimes free, sometimes determined, and the size of the ensembles range from two to five players.

It is relatively unrewarding to concentrate only on trying to discover the similarities or differences between tango and jazz. The music is of a nature where the response should arrive by way of the emotions, instead of it being put to some intellectual test. Throughout the history of jazz there have been influences from other cultures, which gave another dimension to the music. Back in the 20's Jelly Roll Morton spoke of the "Spanish tinge" as a valid ingredient in jazz. Dizzy Gillespie introduced Afro-Cuban music into the jazz repertoire in the late 40's, and Sonny Rollins, born in New York City, might not have composed "St Thomas" (a jazz "standard" for the last 40 years) if his heritage had not been from the islands of the West Indies. The examples are many, including John Coltrane's fascination for Indian music.

In Gustavo and Facundo Bergalli we have two very dedicated jazz musicians who bring with them their Argentinean heritage of tango, without having very many opportunities in their normal playing activities to call upon rich reserve. But here at last with the selection of these ten outstanding melodies, and in the company of equally inspiring exponents of the art, the music flows like a great river, expands and retracts like emotions rising and falling as if to the sounds of tears and laughter. This is music that comes from the heart to warm us, and to draw us into a state of participation, whether it be in the form of song or dance - or just listening and allowing those emotions that we try to keep strictly under control within us to be released. Then - and only then, can we feel the Tango in Jazz and its implications: Love, freedom, passion and wit.
Dave Castle

Towards the end of the nineteenth century two very significant forms of "folk music" began to take form and emerge, both on the same continent but separated geographically and socially. One was the tango music of Argentina and the other was jazz music of the United States. Both began in environments associated with the poor working classes and in back-street bars and houses of "ill-repute", and at first both were shunned by society, to be later not only accepted, but loved by millions the world over.

The history of the music called tango has been written down with the pulse of its great composers and the intensity of its beautiful themes, which have appeared parallel and synchronized with those in the music of jazz. Nevertheless their forms are different and to find the common points was not an easy task.

In Buenos Aires, Facundo became fully occupied searching for tango "clasicos" (the equivalent of "standards"), which contained similarities with the concept of jazz tunes, and he began working on them with the object of preserving as much as possible of their originality.

Magnus Gran and Christian Spering were members of Gustavo Bergalli's Swedish quintet which hade made tours three times in South America, sponsored by the Swedish Institute and the Swedish National Council for Cultural Affairs. Most of their time was spent in Buenos Aires, where they experienced the genuine "porteno" feeling of this great city with its port atmosphere. Of course they were able to listen to a lot of tango music, and its seductive effect remained with them long after they had returned to their native country. They are both great jazz musicians and were natural choices for this project.

With the participation of Gustavo Paglia, we have in his bandoneon artistry the presence of one of the classic instruments of tango. Gustavo, with his special touch, warmth and "tangero" (a deep and genuine feeling for tango music), has just those personal qualities ideally suited for collaborating on this record.

The tunes played by the quartet are performed with a jazz-orientated conception, while in the duos and trio the "tangero" influence is much more in evidence illuminating the fusion between the two music forms. The ballads were played with the same concept as the quartet, but with the extra presence of the bandoneon.

The record begins with the quartet playing "La Casita de mis viejos" ("the little house of my old parents"). We decided to place it at the beginning of the CD as a consequence of the energetic power, which we achieved. The theme is played quite freely at the beginning, and this is followed by some classic up-tempo jazz improvisation. Quite unlike "El Ultimo Cafe" ("the last coffee"), which is interpreted in a delicate manner and allows us to leave the rhythmic and melodic intensity of the previous tune. In the third and fourth pieces the duos make their appearance which gives another atmosphere to the record. "Malena" with acoustic guitar (or, as the Argentineans call it, "Creole" guitar) and bandoneon is played without being tied strictly to the rhythm, and with much improvisation. Almost with the same conception, but with more of a rhythmic nature,"Volver"("to return") introduces the duo of trumpet and bandoneon. "Nada" ("nothing") is a tune, which receives a fresh interpretation by the quartet, and with this placing in the program it, makes a connecting link between the duos and the rest of the music. The next, "Grisel", is played as a jazz ballad with a mood of great melancholy, in which the quintet makes its entry, offering a new combination of sounds on the record. We go back to the quartet formation with "Nunco Tuvo Novio" ("never had a boyfriend"), a melody beginning with the bass and culminating with the trumpet. With its more energetic concept it creates a dynamic contrast, and we go over then to another tango played as a ballad. "Los Mareados" ("the intoxicated people") expresses also great melancholy and a profound sadness. This is the last tune interpreted by five musicians. We return with a lot of energy to the penultimate theme on the record "Naranjo en flor" ("the orange tree in blossom") which provides an atmosphere of great agility as much for the listeners as for the musicians. And so we come to the end with "Soledad" ("solitude"), the only tune played by a trio. The acoustic "Creole" guitar reappears, together with the sound of the trumpet and bandoneon. Although a tempo is maintained during the trumpet solo, the remainder is interpreted more freely, a freedom associated with the music of jazz, and a suitable way to come to the end of this tangero journey.
Gustavo and Facundo Bergalli
Translation: Dave Castle

Jazz Journal, February 1998:
"So what we have here is four very flexible musicians and a more constricted bandoneon player in varying combinations (from quintet to duo) playing some very appealing music which belongs mostly in the jazz realm. Both Bergallis have a lyrical streak and Gustavo (father of Facundo) sometimes sounds like a mid-period Davis or Art Farmer. The Swedish rhythm team is excellent in the jazz idiom but whatever the tango influence may be it's been very subtly alchemised. There's a wistfulness here, which can recall what Davis and Evans, achieved in Sketches of Spain and perhaps that's an aspect of the tango, which didn't survive the commer-cial exportation. The Bergallis are consummate and versatile musicians and this kind of project certainly deserves support." 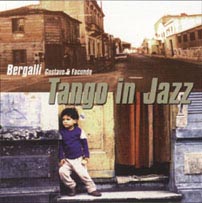