Irene Sjögren gives her expressive interpretation to a collection of carefully selected songs, many of them gems from the "great American songbook." On some of the tracks you can also hear music composed by the renowned American composer/arranger/conductor Maria Schneider. - Irene Sjögren receives strong and sensitive support from her co-musicians Ove Lundin (p), Olle Steinholtz (b) and Gustavo Bergalli (trp).

Isn't that the thing to do - The folks who live on the hill - Yesterdays - 'Round midnight - We'll be together again - Song for a willow - The two lonely people - If you could see me now - I didn't know about you - Cry to the stars - I concentrate on you - Meaning of the blues - Every time we say good-bye.

In all the arts there is a central aim - a quest. In the case of singers and musicians of genuine quality it means a continual striving to reach out and attain a true reflection of their feelings in their interpretations and improvisations. Listening to this CD one feels that here is an opportunity to experience this process as the artist in question, Irene Sjögren, together with her close colleagues, seeks out the very core of each song. Of course it is always a privilege to be able to share such moments and in this case it is also a sheer pleasure.

Irene Sjögren does not belong to the category of newly-hatched but talented young singers who seem to be popping up from out of nowhere on the Swedish jazz scene, however there is an important link. Many of the latter are in fact indebted to Irene Sjögren for their education, training and inspiration received during her lessons at the Royal College of Music in Stockholm where she began teaching in 1989 occupying today an important post in vocal music covering jazz and the Afro-American tradition.

Particularly unusual is the fact that her background contains a significant period of years devoted to the study of elementary particle physics in which she holds a doctorate and in the field of research at the Karolinska Institute in Stockholm. Parallel to her career within research she began singing professionally in 1970.

She was born in Stockholm in 1953 and grew up in a family in which everyone was musical, jazz being the primary interest. Even before she became a teenager she used to go along with her father, a talented pianist, to where he was playing and sing a song or two. Later she began singing in professional choirs and by the middle of the 70s she was working with big bands and with different small groups. By this time Irene had met her partner, pianist Ove Lundin, a musician much in demand in jazz and studio circles and also a teacher at the Royal College of Music in Stockholm. Later in 1983 they formed the Irene Sjögren Quintet together with bassist Olle Steinholtz, trumpeter Gustavo Bergalli (both of whom can be heard on this CD) and drummer Pétur "Island" Östlund.

It was in 1983 - 84 that Irene was invited by the great trumpeter/leader/composer/arranger Thad Jones to take part in several of his projects with, amongst others, the Danish Radio Big Band and the Umeå Big Band. Other big bands with which Irene has worked are the Swedish Radio Jazz Group and the Finnish UMO Big Band, as well as with many small groups and as a featured solo artist on radio and TV programmes.

It must be obvious to anyone listening to this CD that musically there is a depth of feeling and concentration that very few other artists in the vocal field seem able to achieve. Irene Sjögren demands of herself an almost super-human standard in her search for the definitive interpretation of a song. To discover the spiritual centre of each song she has found her own methods of travelling to the place within herself where personal references to life experiences, relations to people and the world around her all play a part in colouring the music and words which she chooses to perform. Although she has an advanced vocal technique which she uses to full effect, it is particularly in the interpretation of the music and lyrics where her talent scores - and which has made a strong impression on many others than Thad Jones.

In a recent interview with one of her former students says: "From early on I have always felt that rhythm in music is a priority, but I have progressively been giving more attention to the notes in relation to the harmonies. When I improvise, I want to come as close as possible - and as naturally as possible - to the feeling of the song, and thereafter the rhythm, the notes and the sound follow. I am a rather shy person by nature so for me music is a perfect method of making closer contact with other people and that is why "feeling" is so important. When I listen to other singers and instrumentalists it is the emotional message they are conveying to me in the music that affects me. Of course it's also wonderful to hear someone with a brilliant technique sing with perfect intonation - it's like swimming in crystal-clear water, but ultimately it is the honesty of the performance which I am most moved by.I think too that I lean towards the melancholy side of music rather than the opposite and that is why I have always liked Chet Baker both as a singer and trumpeter. For me when I am performing I try to be completely true to how I feel at each given moment and in doing so let the music open a door to expose my innermost feelings, whether they may be concerning happiness, pleasure, sadness or even anger. Singing should reflect all these things!"

Irene's choice of songs reveal her strong love of melodies based on rich harmonic structures and it is no coincidence that several of them have been written by piano players, such as: Thelonious Monk, Tadd Dameron, Bill Evans, Duke Ellington, Blossom Dearie and Maria Schneider. It is with this connection that it is particularly gratifying to be able to hear the contributions of pianist Ove Lundin, long a favourite amongst Swedish musicians for his sensitive touch and rich harmonic fantasy but, alas, seldom featured on record to the same extent as here. One hears an obvious love of the Bill Evans approach to the keyboard but also Ove's own rainbow conception of sound, beauty and, in particular, space and form. His solo on "We'll be together again" is an outstanding example of all these qualities.

Ask Irene who her favourite Swedish bass player happens to be and she will answer without hesitation: Olle Steinholtz. Olle is no stranger to the Touché label and plays on two albums with Elise Einarsdotter (TMcCD 008 and 013). His bass artistry comes to the fore in his solo on "The Two Lonely People" but throughout the album one cannot escape noticing the effect of his sonorous tone on the music.

Another musician is trumpeter Gustavo Bergalli who is heard on four of the tracks. In "Yesterdays" and "I Concentrate On You" he plays with an open horn, weaving long and winding lines with his brilliantly burnished sound. As a musician with world-wide experience Gustavo can undoubtedly be counted among the very best trumpet players on the international jazz scene today. On the other two songs his use of the Harmon mute at first may turn one's thoughts to the Miles Davis approach of the 60s, but it is Gustavo's very own personality that comes shining through. Listen to his solo on "Song For A Willow" for clear evidence of his originality. Gustavo is featured on three other Touché albums (TMcCD 001, 003 and 007).

Two of the songs in Irene Sjögren's programme on this CD appear here in vocal versions for the very first time. They were originally pieces written in extended instrumental form by the celebrated American composer/arranger and orchestra leader Maria Schneider. When I had the honour of working with Maria on her first visit to Sweden in 1993 I was struck not only by the depth and complexity of her music but also by its underlying immediately-accessible beauty and it led to my asking her if she could conceive some of her themes having the addition of lyrics. Although at first hesitant to such a notion being possible she graciously gave me free hands to experiment. The results became a collection of songs, of which two can be heard here: "Song For A Willow" (originally titled "The Willow" and dedicated to drummer Mel Lewis) and "Cry To The Stars" (originally titled "My Lament") which Irene, Ove, Olle and Gustavo interpret with sensitivity and insight.

By the way, the song "I Didn't Know About You" also began life as an instrumental number by Duke Ellington, with the title "Sentimental Lady". It was first recorded in 1942 by the Ellington orchestra as a feature for Johnny Hodges.

Laila and Charles Gavatin should be congratulated for taking the initiative of giving us all the opportunity of hearing Irene Sjögren again and the chance to add a major Swedish song artist once more to our collection of recordings. For Irene Sjögren and her musician colleagues on this CD the quest for the highest artistic values will continue, because for them, quite simply, there is no other way!

Jörgen Österberg in Orkester Journalen, November 2001:
"...after a while something begins to happen - you find yourself being drawn into the special and poetic emotional world of this CD. Sjögren's almost timorous interpretation of a number of exquisite songs is deeply fascinating. There exists a particular closeness and intimacy to her singing that I find almost impossible to resist, one which is truly moving."

"On four tracks the masterly trumpet playing of Gustavo Bergalli is added."

She holds a doctorate in elementary particle physics and sings American love ballads. Irene Sjögren teaches young girl singers at the Stockholm Royal College of Music, has sung with Thad Jones' big band and her last record was released, I believe, fifteen years ago. Already back then she had me soaring skywards.

Hers is not the kind of voice that shakes its hips. It has feelings that are pure and straight. Just when you think it is dying away a little fast vibrato appears which ends with a hug. She doesn't need those flirtatious sighs behind which most of the other female singers hide. Therefore she dares to expose her vulnerability in difficult songs such as "'Round Midnight" and "Yesterdays". The title song by Maria Schneider and Dave Castle is beautiful, with the bass and a dark piano building a counter-melody to the voice.

The music lacks bombastic effects and drums. Ove Lundin's piano is fastidious and one is often reminded of Bill Evans. Gustavo Bergalli's trumpet appears at unexpected places with a soft tone, more that of a cornet than a brash trumpet.

When Irene Sjögren climbs up to the extremely high notes I find myself becoming dizzy. I feel as though I am holding a fledgling in my hand. That's why this is one of last year's most thrilling recordings. 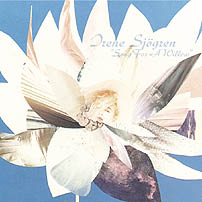