This CD contains material originally released on LP with Knud Jørgensen (p) and Bengt Hanson (b). Recorded live in March 1983 at Maxim in Stockholm, with an additional four tracks recorded live in August 1992 at Castle Hotel in Stockholm and featuring Gustavo Bergalli on trumpet (see also "Day Dream" - TMcCD 003). Two of the tracks are blues - "EKE Blues" and "2 East, 3 West" - and Knud Jørgensen was very proud of them.

In the early eighties Laila and Charles Gavatin would listen to the pianist Knud Jørgensen and the bass player Bengt Hanson - the duo known as Knud & Bengt - as often as a chance occured. They had the idea of recording the music one evening in 1983 at the restaurant Maxim in Stockholm, and the result was the LP album "Knud & Bengt at Maxim", which now constitutes the six first tracks of this CD. Another CD, "Bojangles" (Touché Music TMcCD 002), stems from the same event. In 1992, Laila and Charles Gavatin decided to record yet another few evenings, but this time with a trio, where Knud & Bengt perform with the trumpet player Gustavo Bergalli. In the four final tracks of this CD you hear the trio at the Castle Hotel in Stockholm. More recordings by the trio of the Castle Hotel evenings are available on the CD "Day Dream" (Touché Music TMcCD 003).

Knud Jørgensen was born in Copenhagen in 1928 and died in 1992 in Stockholm. He decided to stay in Sweden while on tour with a Danish band in the mid-fifties, and remained for the rest of his life. He was a brilliant pianist, both as a rhythmic prompter and as an explorer of the secrets and possibilities of the chords. This was true whether he accompanied guest soloists such as Toots Thielemans, Ben Webster, Harry "Sweets" Edison and others, or recorded with Svend Asmussen, Arne Domnérus or Lars Erstrand. Most often, however, one could hear him with his own small groups, and from the late seventies usually in a duo with his musical spiritual brother, the bass player Bengt Hanson (born in Stockholm in 1944). Bengt's bass lines are solid and distinct but also impulsive and inspiring. The duo therefore became a musical unity, setting out on a mutual understanding and dialogue on an equal footing. There was no need to add a drummer, but occasionally some sensitive wind player such as the trumpeter Gustavo Bergalli would perform as a guest. Gustavo (born in Buenos Aires in 1940), who moved to Sweden in 1975, has had his own quintet for several years and enjoys international repute.

Both the instrumentation and emphasis on the lyrical and melodious give this music a soft character akin to that of chamber music, a fact that is not at all contradicted by the rhythmic vigour and the unambiguous sharpness of the formulations. Of the six duo numbers, four are well-known evergreens, while Skiss is a simple, hummable original tune by Knud and Teddy the Toad is a blues theme by Neal Hefti, written for Count Basie's big band in 1957. The duo's explosive impact has of course dimensions other than those of Count Basie's so-called atomic band, but you also perceive the sting and clinging rhythm in Knud & Bengt.

Duke Ellington was one of Knud's guiding stars, and performed here is the ballad Prelude to a Kiss from 1938, the year the first of Ellington's several recorded versions came to be. Knud takes the first chorus alone in free tempo and is then joined by Bengt in thematic variations where the intensity successively ascends to Bengt's solo, after which the duo returns to the theme. I Thought about You was written by Jimmy Van Heusen in 1939, when Benny Goodman and the singer Mildred Bailey made the first recording. Here too Knud first plays a piano chorus in free tempo before the dual play takes it to a swinging groove, and the intensity reaches a climax just before Bengt's solo takes over.

Carl Fischer's You've Changed from 1941 has later been played by Dexter Gordon and many other jazz greats, but to most people it is probably Billie Holiday's touching 1958 version that remains etched in memory. When the slow tempo is doubled, Knud's left hand accompaniment occasionally gives the impression that a guitarist has joined in. I Should Care by Axel Stordahl and Paul Weston was introduced in the 1945 film "Thrill of a Romance" with Esther Williams and Tommy Dorsey's orchestra. Later the tune joined the jazz repertoire, mainly through the pianist Bud Powell's 1947 recording.

Of the tracks recorded by the trio, two are standard tunes and two are blues. Both Richard Rodger's Have you met Miss Jones, which was included in the Broadway musical "I'd rather be Right", and Allie Wrubel's Gone With the Wind, which is not related to Broadway, date from 1937. Both appear in Art Tatum and Ben Webster's legendary 1956 recording. Gustavo's melodious trumpet improvisations bloom to full glory in these two classics.

E.K.E.'s Blues - the initials are Edward Kennedy Ellington's - was written by the bass player George Duvivier for a duo recording with the pianist Jimmy Rowles in 1978. The theme is played by Bengt, whereupon Gustavo plays several lyrically saturated choruses, reminiscent of stylists such as Harry Edison, Chet Baker and Miles Davis in the 1950s. Knud then contrastingly performs a powerful and very laconic play of chords, before Bengt has his solo that later lapses into the theme. Two degrees East, Three Degrees West is an oddly constructed blues theme by the pianist John Lewis of the Modern Jazz Quartet. The title refers to the fact that the John Lewis-Bill Perkins Quintet, for which the piece was written in 1956, was formed by two musicians from the East Coast and three from the West. Bengt is the first soloist, followed by Gustavo and Knud, whereupon Gustavo returns before the theme reaches its conclusion.

Knud was most sensitive to the atmosphere and ambience of the blues numbers recorded by the trio, but the CD "Day Dream" was intended to contain only ballads, which is why other tunes were passed over. The two blues numbers by the trio that are presented here can be seen as a special tribute to Knud and his long and really affectionate work in jazz.
Albrekt von Konow
Translation: Isabel Thomson

"Bassist Hanson is equally fluent and hard driving, with a superb tone."

"There is outstanding rapport between both artists"

"The spirit of Duke and Blanton lives with Knud and Bengt!"

Cadence, November 1997:
"The pianist has a strong, sensitive side which reveals itself on the ballads, and also on the blues pieces....".

"His dept to Errol Garner is clear, but Jorgensen is his own man featuring dramatic shifts in dynamics, changes in tempo, and good use of syncopation and swing".

"Bengt Hanson is a good foil [...] as he dutifully plays the role of intimate sideman, interweaving fully developed lines laden with inference." 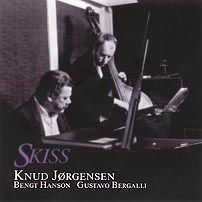