Pianist Elise Einarsdotter and the double-bass player Olle Steinholtz perform both solo and duo in an inspired selection of their own, as well as of others compositions, such as "Nardis", "Falling Grace", You Must Believe in Spring" and "In Your Own Sweet Way". Each meet the challenge of playing solo superbly, and in their duets they demonstrate how naturally they complement each other in the best possible way. A warm, melodic and exciting rhytmic experience. Recorded in January 1998 in Stockholm.

What do Bobbie James, Madame Alfred Carrière, Constance Spry, Queen Elizabeth and Grandpa Dickson have in common? At first they appear to be names of some eccentric characters in a play, the kind with a lot of confusion on stage and doors continually opening and closing. In fact they are names given to different kinds of - that most beautiful of flowers - the rose. Billy Strayhorn expressed beauty in his song "A Flower is a Lovesome Thing", and the title of this CD reveals that beauty is an important factor in this music too.

Elise Einarsdotter is a pianist and composer who has led her own group Elise Einarsdotter Ensemble (E.E.E.) since 1984. She was born in Österlen in south-eastern Sweden in 1955, and at the age of eighteen she went to the USA to study and work in New York and at Berklee College of Music in Boston. After four years she returned to live in Stockholm to freelance.

Olle Steinholtz, despite his stunning technique, is a self-taught bass player. Born in 1948 he has an impressive list of credits as a freelance bassist, having accompanied many visiting American musicians to Sweden, including Woody Shaw, Thad Jones and Charlie Mariano. He has also been a member of such groups as Egba, Tintomara, Nils Sandström's Sextet, Steve Dobrogosz Quartet and of course Elise Einarsdotter Ensemble.

The Ensemble is a group with a very wide range of musical expression. Elise herself is a pianist who has continually extended her music into new areas. Deeply rooted in the jazz tradition, she has explored many possibilities of combining folklore elements into her playing and composing.

She has taken her group, at present a quartet, on tour to many different parts of Scandinavia and Europe, and recently they have played in both Ethiopia and India. These experiences are undoubtedly channelled back into her creative nature to give new dimensions to her playing and composing.

Not only do Elise and Olle contribute to providing the rhythmic backbone of the Ensemble, but also they have also found each other on a personal level, and are now married and have a young daughter, to whom two of the compositions on this CD are dedicated.

With four CDs to their credit it would seem that E.E.E. is a formula that provides a perfect musical environment for Elise and Olle. However, there are many different ways of expressing oneself musically, and for many pianists, given the nature of their instrument, there are several who would gladly put themselves to the challenge of making a solo album, should they be provided with that opportunity. In this case it was an initiative taken by Laila and Charles Gavatin after some discussions in the late summer of 1997, and in January 1998 Elise and Olle put their heads and hearts together and came up with this inspired selection of both solos and duets. In fact there are some tracks on which Olle plays solo bass, and it is to his credit that he succeeds in creating an almost orchestral sound on this large four-stringed instrument, most noted for its timekeeping role in jazz. In playing solo there lies an interesting enigma: While there are few problems in selecting favourite material, the very act of playing solo brings the spotlight to bear on every aspect of the musicianship of the artist in question. Both Elise and Olle prove that their capabilities meet these challenges superbly. As for their duets, they complement each other perfectly, but having known each other and played together for so many years I wondered if there was a risk that they might run out of ways of surprising each other nowadays. Elise replied: "It's almost essential that we should always keep searching for new things to say", and Olle added: "Perhaps even more important than surprising each other is the fact that we should still be able to surprise ourselves". What comes as a delightful surprise for me are the completely spontaneous improvisations, (for example "Impulse 1 and 2" and "Sketches of Roses") which are impressionistic gems, and sound as though they have been composed with much preparation and thought. This is however not how they were created, and proves without doubt Elise's qualities as a gifted improviser. Instant composition containing contours, form, development and so many creative elements is a rare art which only a few command, and it is interesting to read her comments on how these musical pictures came to life as music. It becomes plain that the piano is her joy and consolation in relation to what is happening around her in the world. Listening to Olle's on-the-spot improvisation titled "Bass Haze", convinces me that there is nothing that could be added or taken away to enhance this piece. Although relatively short in duration, it is the epitome of a truly spontaneous composition, and like Elise, he creates a work of validity that stands on its own. Oh yes - I nearly forgot to mention - it swings like mad too!

Another of the qualities that one notices listening to this CD is the clarity of sound that both these musicians produce from their instruments, and the admirable sound-engineering. Elise is very particular about piano-tuning and has said that on her Swedish tours she can tell almost instinctively which individual piano-tuner has prepared the instrument she will play that evening. Apparently pianists and piano-tuners know and relate to each other rather like golfers and caddies. And sometimes the piano must be called upon to stand up to some very muscular and demanding treatment - listen to "Song of Ra" with its joyous keyboard "workout".

Then there is the subject of bass players and double basses. Since Jimmy Blanton, among his other genial qualities, made his bass notes resonate longer than those before him, as one can hear in those masterpieces from 1940 with Duke Ellington, the bass has gone through several revolutions with regards to strings, fingerboards, microphones and amplifiers. Certain bass players possess and play an instrument almost comparable to a Stradivarius, and you would be forgiven for believing that Olle is one of them. I can't remember having heard a bass recording that brings me so near to the player as on this CD, so it came almost as a shock to learn that in fact the instrument cost less than a couple of hundred dollars back in 1972 (a period when most people were investing in electric Fender basses) - complete with a protective cover and transport to the door! Over the years Olle has built up an affinity with this extraordinary treasure of an instrument which should make any player, bassist or otherwise, green with envy. Having a great interest in carpentry he has worked on methods of adjusting the fingerboard and also the position of the strings in relation to it, thereby creating his own personal sound. He names Steve Swallow as an early source of inspiration, and therefore "Falling Grace" has an appropriate place in the programme.

As far as the selections go I feel that it is best left to the musicians to make their own comments, but a thought has been going around in my head. It is this: When it is time to find a name for a new variety of rose, why not choose "Elise" or even a "Steinholtz Pride"? After all, roses, like diamonds should be forever.

So should the music on this CD.
Stockholm March 1998
Dave Castle

My compositions and ideas are often derived from the relations that I have to people around me. Also from nature, and sometimes just from a certain kind of light or sound. Here come a few short guide-notes about the songs on this album.

Vanja: A song for our beloved daughter, who was only four days old when this song was composed in my mind, and later written out for a concert in Paris. - Come Sunshine (in Swedish Kom vår sol) is a blessing and greeting to the sun, which we long for so much in our country. I originally wrote this as a children's song, but it is also sung by grown-ups and I recently conducted and heard it sung by over a thousand people at a convention of choirs in Sweden ... quite an experience, I can assure you! - Bass Haze: Olle's comment: A bass battle for four strings. - Impuls 1,2: Fantasies, memories ... arriving in Stockholm, my old apartment, summer. - Else-Britt's Blues: A twist on my name Elise, which for some reason in Sweden is very often misspelt, mispronounced or transformed into something totally different. This has generated many laughs for the guys in my band, and of course been the source of several nicknames! Else-Britt is one of them. - Sketches of Roses: (in Swedish Rosenskisser). Ghislain de Feligonde. I love roses and am deeply fascinated by them. For me they seem to contain so much of the core of life ... the petals and the thorns ... together they create a beautiful flower. Love and wrath, passion ... the elements of life. (For my man). - Sacred Hearts: A song dedicated to all the beautiful women friends I have always had around me. To their loyalty, strength and sensitivity. - Song of Ra: Greeting the sun ... AGAIN! - You Understand: Just the tone of a voice can sometimes create a song in my mind. This happend here. - The Little Girl with the Shells: Here again, as so often for me, the vibration and sound from another person created the song. I was watching Vanja collecting shells on the seashore, and then playing with them in her hands. - I Fall in Love too Easily: Sammy Cahn and Jules Styne's beautiful ballad. What can I say ... to be carried away is something I strongly recommend. In music, with people, in living. - Time Remembered, Nardis, Falling Grace, You Must Believe in Spring, Israel and In Your Own Sweet Way are all favourites of ours that we enjoy playing and often return to. Great composers: Bill Evans, Miles Davis, Steve Swallow, Michel Legrand, John Carisi and Dave Brubeck.
Elise Einarsdotter

Many, many thanks to Laila and Charles Gavatin for taking this initiative for us to use another part of the palette to paint our musical pictures. Also, many thanks to all of you who listen to us and always communicate energy and vibrations from which we can draw inspiration to play on!
Stockholm, March 1998
Elise Einarsdotter - Olle Steinholtz

Jazz Journal, February 1999:
"Olle's support rhythmically and harmonically to Einarsdotter's creative and thoughtful piano improvisations is equally commanding. The rapport between them is complete. Elise is a sensitive player, often featuring original compositions. Some of her pieces are dedicatory. Two are for her beloved daughter, and 'Sacred Hearts' is to 'all the beautiful women friends I have always around me'."

"According to the excellent notes, which comes with the album, Steinholtz was self-taught. He has a phenomenal technique, a gorgeous tone and great musical imagination. Both artists play solo and in duo. Unaccompanied bass solos can be none too exciting affairs but Steinholtz succeeds brilliantly. 'Bass Haze' is a violent assault on the strings, while a slow tempo, Michel Legrand´s fine ballad, 'You Must Believe In Spring', features arpeggio and held-note work of the highest order. Surprisingly we don't get a chance to hear his Arco work."

"There is much beautiful music to be heard."

"An unusual and well recommend album." 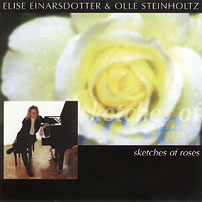