Saxophonist-composer Amanda Sedgwick is one of the younger generation of musicians who have established themselves on the Swedish jazz scene. On "Reunion" she demonstrates her qualities both as composer and alto saxophonist. The quintet format gives listeners an opportunity to not only gain greater insight into Amanda's approach and conception but also those of her excellent group.

The programme includes four originals by Amanda and as well as some unusual standards and other seldom-heard material. This recording must surely add considerably to the well-justified reputation that Amanda Sedgwick has already earned!

We went into the studio on a wet snowy morning in Stockholm. We had been touring for a couple of weeks, sharing experiences and getting to know each other. There was Gilbert arranging his cymbals, quietly setting up his drums. Martin was standing with his bass, wearing one of his energetic smiles, making you feel everything was going to be allright. At the grand piano Daniel was trying out the keyboard. He and Martin were the youngsters of the band but didn´t sound it. And there in a corner sat Philip, warming up on one long tone. I was afraid we were going to feel too separated standing in our little booths of the recording studio - so different after having been so close to each other up on stage. But when we started playing I actually didn´t mind it so much. The feeling of being together with these wonderful guys was stronger. And this is what we played for you:

Sylvia is a friend of mine who lives in Rotterdam. Thinking of her this tune just popped up in my head, ready to play.

To my friends, a tune of thanks to all of you in the Hague, Holland, who arranged a benefit concert for me when my horn was stolen. If something, this proves that there are still good people in this world! Incidentally, this new horn of mine, purchased partly with this money and partly with the gracious help of Elisabeth Wesseling, is so much better! And every time I play it, I´m reminded of the love you gave me.

I´ve never been in love before; isn't that the way you always feel when you´re in love? Like it's for the very first time. You take a walk with this person by a lake and it´s like you´ve never seen a lake before. You play a tune you have played so many times, and it´s like you've never played a G before.

I have a special affection for the city of Beirut, Lebanon, where I've been invited to play a couple of times. I have many fond memories of this place. Beirut in summertime is hot, humid, sensuous, fast moving, dirty, pretty and war-torn. At night it is velvety soft and dark, smelling sweetly of blossoming camellia. The street Rue Hamra runs through the city district, where walking home with a friend in the small hours you can hear the distant cry of the muezzin, calling to morning prayer.

A blue jay is a little bird that, according to Philip, sounds exactly like the repetitious phrase on which the tune with the same name is built.

There are certain people who, in all their knowledge, age and experience, have kept a core of innocence. They are always open to life, they love everything as for the first time, and you feel excited in their presence. To these people, although sometimes faced with the hard facts of life, the song stay as sweet as you are is dedicated. And perhaps that is even what the song that follows is all about:

In the original recording it is Marvin Gaye who sings "when did you stop loving me, when did I stop loving you?", bitter experiences of betrayal. Still, he recalls moments of happiness, and goes on: "but when two people have to part, sometimes it makes them stronger."

The wizard of time is what you in Philip´s words would call the sorcerer of antiquity. And the wizard of time is, just like Louis Armstrong, or Charlie Parker, or Clifford Brown... the guy who owns time - this subject that music concerns itself so much with. And they own time because they transcend it - their music is timeless, just as music itself is. And because they in their timelessness own time, they own our attention.

Cedar Walton wrote a tune that we love playing, which also has two titles. The Japanese word for "fantasy" is "ugetsu", which is what we always hope to provide you with when we play.

Such smooth skin, like brown silk, and such dark, loving yet impenetrable eyes! I wrote this tune thinking about a very dear, and very beautiful friend of mine.

A sweet reunion this has been, and will be every time we get together and play again. My hope is that we will pass this feeling on to you, so that each time honest and heartfelt music is being played it will be a true reunion for musicians and listeners alike. And surely that's what all of us need to do - reunite!

Jack Bowers in allaboutjazz.com:
"[...]I do know a player when I hear one, and Sedgwick not only holds her own on this engaging bop-based quartet/quintet date, she overshadows everyone [...]"

"Sedgwick is a first-rate composer too, as epitomized by her splendid originals, 'Sylvia', 'To My Friends', 'Rue Hamra' and 'Brown Silk.'"

"[...] a splendid album of contmporary bop-centered jazz supervised by an eloquent spolesperson, Amanda Sedgwick, whose captivating voice we hope to hear more often." 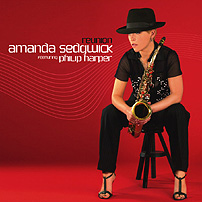