Enjoy four of Sweden's most prominent and expressive jazz musicians performing a program made up of four standard evergreens, two compositions by Thelonious Monk, one standard by Billy Strayhorn and four originals by trumpeter/composer/arranger/writer Ulf Adåker.

The standard tunes: East of the Sun (and West of the Moon) was written by Brooks Bowman for a Princeton College production in 1936. In his book American Popular Song, Alec Wilder describes it as "... a big commercial hit which became a long-term standard song." The change of key in the middle of the tune is actually my idea, although the idea as such has been used by jazz musicians earlier in other tunes.

The classic Tom & Jerry movies were top priority TV-entertainment for me and my son in his younger days. In one of them (the one where Jerry is chased by Tom!) How About You is heard and I was reminded of the quality of the tune. Burton Lane wrote it in 1941 and in bars 9 - 12 there is an elegant chord sequence modulating to a perfect third below the original key. The same chord pattern is featured in If I Were a Bell from the musical Guys and Dolls written by Richard Rodgers a year earlier, so I guess he should get the credit for the innovation. For reasons unknown I've come to play How About You in Gb major, a key seldom used for playing standards.

Rodgers is also the author of Manhattan which according to Wilder was "... Rodgers and Hart's first hit". Again it's a tune that came back to me while watching TV: in a film Mickey Rooney sang "We've got Manhattan, the Bronx and Staten Island too..." The rhyme is perhaps more daring than the harmonic structure of the tune, but the melody line is definitely nice.

Over the Rainbow. No introductions are necessary. A tune close to becoming worn out. Here mildly reharmonized in an effort to avoid the all-too-obvious and predictable, hoping that the melody which doesn't appear until the end may come as something of a surprise (providing you play the track without reading the title).

The great jazz composers: Thelonious Monk? Of course! (check out Monk By Five, Touché Music TMcCD 012). For me Monk has been a musical companion since my early teens. Gallop's Gallop is taken from a recording made in 1955 where alto saxophone player Gigi Gryce was the bandleader and played with Monk, Percy Heath and Art Blakey. The melody is a gem but not even Monk himself played it so often. The recording of Reflections that I've used as a model for our version is the one Sonny Rollins, Monk, Paul Chambers and Blakey made for Blue Note in 1957. It's usually treated as something between a ballad and a medium-slow tune and is surely one of Monk's most beautiful compositions.

Billy Strayhorn's A Flower is a Lovesome Thing has, like most of his compositions, a complex harmonic structure compared to the jazz repertoire of the same era. The chord structure is built on a version generously provided by the master trumpet player Kenny Wheeler at a seminar in Stockholm a few years ago.

The originals:
Loose Changes is based on Gershwin's I Got Rhythm. "I know that I Got Rhythm has been played ad nauseum by jazz groups since the time it was first heard. And if it made many players happy I'm glad. But to be candid, my particular gratification is that, since jazz presumes improvisation, in all my hearing of the song by jazz groups, I've always heard endlessly different variations of the original. It was a high point in the show. It was a great vehicle for Ethel Merman and again I'm glad. But as an effort by a major writer, I find it a passing fancy, enormously successful though it obviously has been." - Alec Wilder, American Popular Song.

La Mano, The Cape of Good Hope, And More... are melodies taken from arrangements for a large ensemble: The Café International Orchestra. On Katarinavägen in Stockholm there is a sculpture, La Mano,honouring the Swedish volunteers in the Spanish civil war where idealism was betrayed by political fundamentalists. The music is intended to reflect Spanish melancholia.

When Bartholomeu Diaz in 1488 sighted the cape which lies west of the southern tip of Africa he named it Cape of Good Hope hoping to reach India. He failed. The cold streams of the Antarctic mixing with the warm streams of the coast of eastern Africa made navigation too difficult. Music is not only organized sound but also reflects lifestyles, experiences, attitudes, values... and more. 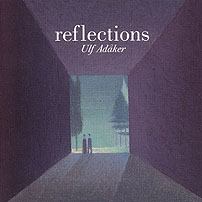