On this CD you can enjoy five most prominent Swedish musicians performing music composed by Thelonious Monk - one of jazz history's most original pianists and composers. If they have taken any liberties with Monk's music it is more in relation to forms for improvisation over his themes rather than with the original versions of the compositions themselves.

"He works almost exclusively with the basic elements of jazz; with the exact structural significance and expressive values present in different melodic intervals, rhythmic nuances and the harmonic changes at every given musical moment [...] Monk's very individual sense of harmony is a central element in his music. It is perhaps more by way of these austere, intense sounds rather than his extraordinarily subtle sense of rhythm that we can perceive Monk's sharp intellect, which stubbornly avoids everything which is commonplace." Sohlmans Musiklexikon. (Sohlman's Dictionary of Music). (Unofficial translation.)

Of the sixty-or-so compositions which Thelonious Monk composed, many have received the status of "standard". They have been recorded by several jazz artists and are generally expected to be included in the repertoire with which a professional jazz musician should be familiar. Belonging to this category are, amongst others, "'Round Midnight", "Straight No Chaser", "Well You Needn't", "Blue Monk", "Rhythm-a-ning", and perhaps also "Ruby My Dear", "Pannonica", "I Mean You" and "Bemsha Swing". The three first-named were elevated to the "standard" category largely due to the fact they were part of the repertoire of Miles Davis during the Fifties and received much attention due to his quintet recordings. In general the versions of "'Round Midnight" and "Well You Needn't" which are played today have more of Miles Davis' harmonic character than Thelonious Monk's and "Straight No Chaser" is usually played in the key of F which Miles chose for his version on the album "Milestones" from 1956, while Monk himself always played this, his own blues, in B flat. It is common practise for jazz musicians to create their own interpretation of other people's themes, but in general Monk's compositions do not respond positively to being treated differently, changed or "improved". For my ears many of the lyrics which have been added to certain of his themes sound altogether too ingratiating and do not make a suitable match to the harsher harmonic elements which constitute such an important part of Monk's music. When Monk's other works are recorded it is often in a manner of which this album is an example: A project is planned featuring music by one of jazz history's most original composers because of the fact that his own versions have left such a lasting impression. If the compositions are to retain their quality the original versions should be respected. If, in this case, we have taken any liberties with Monk's music it is more in relation to forms for improvisation over his themes rather than with the original versions of the compositions themselves.

The tunes we have chosen have the following background: "Let's Call This", "Think Of One" and "Locomotive" have been chosen from the album MONK (Prestige LP-7053) from 1953, and all three tunes belong to the category of those which are not played very often. The original versions of "Bemsha Swing", "Bye-Ya" and "Monk's Dream" can be found on the trio album MONK'S MOOD (Prestige LP-7159) recorded in 1952. "Worry Later" was recorded in 1960 in San Francisco (it was also titled "San Francisco Holiday") for the Riverside record company. "Evidence" is an early work which was recorded by Blue Note records as far back as 1948. Other well-known versions of this composition can be found on the records SOLO PARIS (1954), ART BLAKEY'S JAZZ MESSENGERS WITH THELONIOUS MONK (1957) and THELONIOUS IN ACTION "live" from the jazz club Five Spot Café in New York. "Light Blue" also comes from the same recording at the Five Spot and the two LP records that were issued featured the quartet with Monk, tenorist Johnny Griffin, bassist Ahmed Abdul-Malik and drummer Roy Haynes. They were made in the summer of 1958 and are undoubtedly among the better in Monk's discography. "Ugly Beauty" is a composition from the last period in Monk's career. During this time he was under contract to CBS and this ballad (the only example among all his compositions which is in waltz-time) can be found on the album UNDERGROUND made in 1967-68. "Pannonica" and "Ruby My Dear" belong to Monk's finest ballads. The former is dedicated to jazz patron of the arts and baroness, Pannonica de Koenigswarter, who belonged to the British side of the Rothchild family. She was a great friend of jazz and took up residence in New York in 1951 where she hired a luxury suite at the Stanhope Hotel on Fifth Avenue. Her apartment soon became a meeting place for prominent jazz musicians of the modern school, but quite a short time after Charlie Parker had died in her apartment she was evicted from the Stanhope and she then moved to Bolivar Boulevard. She acquired a piano and the new apartment became a centre for nightly jam sessions. Monk was a regular visitor and wrote many of his compositions there. The first recorded version of "Pannonica" appeared on BRILLIANT CORNERS (Riverside RLP 12-226) excellently interpreted by saxophonists Sonny Rollins and Ernie Henry. The most definitive version of "Ruby My Dear" is without doubt the one recorded by Monk and John Coltrane together with bassist Wilbur Ware and drummer Shadow Wilson in April 1957. Because Monk and Coltrane were each under contract to different record companies at this time it was difficult, for petty reasons business-wise, to arrange a recording session with this constellation.

Some months before Monk's quartet with Coltrane began a long engagement at the Five Spot Café in the summer of 1957 they had both met at the home of the baroness. In an interview in the January 1962 issue of the French magazine "Jazz Hot" John Coltrane commented on this meeting: "We stayed there the whole night. Monk explained one or two phrases to me at the piano, we listened to records and the Scotch flowed in streams". The magic chemistry in the meeting between Monk and Coltrane is comparable to that which existed between Duke Ellington and Jimmy Blanton, Billie Holiday and Lester Young, and Charlie Parker and Dizzy Gillespie. Unfortunately the documentation of recordings of Monk with Coltrane is decidedly more limited: a trio version with Monk, Coltrane and Ware of "Monk's Mood", and a handful of recordings with a septet (which included the doyen of the tenor saxophone Coleman Hawkins). As regards Monk's quartet with Coltrane, there are two more tracks of superb studio recordings from the same session as "Ruby My Dear", as well as a "Lo-Fi" recording from the Five Spot Café which Coltrane's wife made with a portable tape recorder. To judge from available recordings, such style-forming musicians as Rollins, Coltrane and Blakey could relate quite congenially to Monk's music, whereas Parker, Gillespie and Miles Davis seem to have had more difficulty in approaching Monk on a musical plane.

For me Thelonious Monk's relationship to his music is an example of an artistic attitude of a similar nature to that of Vincent van Gogh: it was necessary for them to express themselves in the way they chose, even if they did not receive any understanding or appreciation for their work for a long period of time. There was simply no reason for them to adapt themselves or compromise their art, on account of the fact that they were convinced of the validity of their work. However, unlike van Gogh, during a period in his life Monk experienced an artistic break-through. For a period of ten-or-so years from the beginning of the Sixties he made international tours and secured a contract with the record company colossus CBS, which resulted however in few albums of really lasting importance. Instead it is Monk's compositions and recordings from 1947 - 1960 which still have qualities of luminosity and originality that continue to attract the curiosity and interest of musicians the world over, of which this CD is an example. Hopefully we will be able communicate something of our fascination for one of the most individual forms of expression in jazz music to you dear listeners.
Ulf Adåker
Translation: Dave Castle

Michael Tucker in Jazz Journal, June 2001:
"Here is someting rather special: a fresh-sounding selection of prime Monk compositions interpreted with both sensitive care and no little flair by some of Sweden's finest contemporary players..."

"... this project grew out of a considerable acquaintance with Monk's recorded legacy."

"There have been a good many Monk tributes already: this must rank as one of the most enjoyable..."

"The record was produced by Laila and Charles Gavatin's Foundation for Jazz Music. Well done to them: I look forward to their next project." 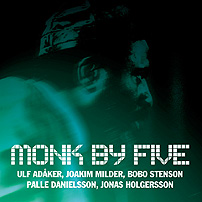 All music composed by Thelonious Monk