The five prominent Swedish jazz musicians who were responsible for the much-praised album of Thelonious Monk's music "Monk by Five" (TMcD012) now turn their attention to a new project.

The music of Charles Mingus is an obvious choice as both men's careers ran alongside each other and they worked in the same musical environments. Their compositions encompass a range from the straightforwardly simple to the extremely complex.

On this album the music of Mingus is presented in all its different shades and layers of sound, wonderfully interpreted with true devotion by five genuine and gifted exponents in the art of jazz improvisation.

THE MUSIC OF CHARLES MINGUS
The eightieth anniversary of Charles Mingus' birth in 1922 was celebrated throughout the jazz world both in the media and in live performances of his music, but that was not the main reason for why this album was recorded. In depth and originality there are similarities between the music of Thelonious Monk and Mingus and if "Monk By Five" (Touché TMcCD 012) was to be followed by a new project then Mingus was an obvious choice. Both men's careers ran alongside each other and they worked in the same musical environments. To my knowledge there is no recording where Monk and Mingus play together, but a classic photograph taken by Robert Parents in 1953 shows Charlie Parker, Monk, Mingus and Roy Haynes in action at the "Open Door" in Greenwich Village, New York. In Gene Santoro's book "Myself When I Am Real - The Life and Music of Charlie Mingus" (Oxford University Press, 2000), which contains a detailed summary of Mingus' music and his turbulent career, there is a note that in the same year Mingus played with Monk on the Steve Allen Show.

Monk's collected works are more uniform in character whereas Mingus' compositions seem to spread out in many different directions. Monk creates his own musical grammar whereas the inspiration to many of Mingus' compositions can be traced to the black gospel tradition, Ellington and Parker. For both men the blues and strictly personal interpretations of the standard repertoire were important elements, and thematically their work encompasses a range from the straightforwardly simple to the extremely complex. Irregularities to the conventional theories of harmony can be found in Monk's music but in matters of form it is Mingus who is the more expansive. "Reincarnation of a Lovebird" with its 66 bars is an example of this. The lines of the theme also demonstrate Mingus' lack of regard for the brass and wind instruments' normal registers and ways of playing. The composition is dedicated to Charlie Parker and can be found on one of Mingus' records for Candid from 1960, although the original version comes from the the album "The Clown", recorded in 1957. In the liner notes Mingus states: "I wouldn't say I set out to write a piece on Bird. I knew, when I first started writing it, that it was a mournful thing. Suddenly I realised it was Bird. Then, on developing the piece, we tried to play little things that would bring back that era." We have also used Mingus' collage technique with references to Charlie Parker's music. Trumpeter Bosse Broberg once described Joakim Milder's solo lines as "arabesques", a description I find very apt, not only here but in his playing generally.

"What Love" was also a part of the Mingus repertoire in the year 1960 and was played by the eminent quartet of Mingus, Eric Dolphy, Ted Curzon and Danny Richmond. A live recording was made at the Antibes Jazz Festival in July and this was followed by a studio recording in October. The theme is based loosely on Cole Porter's "What Is This Thing Called Love?" but Mingus follows his own path and treats the structure of the tune very freely. At this time Ornette Coleman was in focus as a prominent figure of a style that was referred to as "free form", but for Mingus this way of playing was nothing new - "free playing" was being practised in his "Jazz Workshop" already in the '50s.

"Dizzy Moods" is taken from the album "Tijuana Moods" recorded in 1957 and as a harmonic sequence Mingus uses Dizzy Gillespie's composition "Woody n' You". We have preserved the four 4-bar introductions that are played in succession and in this number there are a couple of short solo passages from our drummer Jonas Holgersson. Listening now afterwards I regret that he didn't receive more solo space. His playing throughout is so naturally integrated and his presence has such qualities that no one should be surprised that in the course of two years or so Jonas has established himself among the elite of Swedish drummers.

can also be found under the title "Weird Nightmare" with a vocal by Lorraine Cusson on the album "Pre-Bird" from 1960. However, our version is taken from the quartet session which Miles Davis made for Prestige in 1953 when Mingus sat in on piano. What we play as the closing theme is Miles' version of Mingus' melody. Bobo Stenson's lyrical reflections establish a serene atmosphere and his introduction should have been allowed to continue for much longer - a realisation which, once again, unfortunately came in retrospect.

Peggy's Blue Skylight and Orange Was The Color Of Her Dress, Then Blue Silk were included in the repertoire which the Charles Mingus Sextet played during a European tour in the spring of 1964. Performances by the band have been documented in recordings from, among other cities, Oslo, Stockholm, Copenhagen, Paris and Stuttgart - regrettably in some cases in bootleg versions to which Mingus was vehemently opposed. There are also TV-recordings from concerts in Oslo and Stockholm. The band was a superb vehicle for Mingus' music with Eric Dolphy on alto sax, bass clarinet and flute, trumpeter Johnny Coles (who accidentally fell down from the stage in Paris and was so badly injured that he was forced to discontinue the tour), Clifford Jordan on tenor sax, Jaki Byard on piano, and Mingus' loyal drummer-colleague-in-arms Danny Richmond. Mingus' arrangements for the sextet were superb and after Cole's untimely absence the arrangements were played in the form of a quintet. Mingus compensated for the missing trumpet part in different ways and in "Orange Was The Color..." with its references to the early style of stride piano and Ellington, Mingus gave the lead melody part to the piano. In my opinion it was a not the most successful solution to the problem and in our version the theme is once again played by the trumpet.

Goodbye Pork Pie Hat is one of Mingus' most often-played and well known pieces. It is dedicated to Lester Young. Lyrics have been written and it has been recorded by many artists. Without actually being a blues there is much blues feeling in the theme and what could be more appropriate than to have it presented by Palle Danielsson, for my ears (and those of many others) an instrumentalist on a par with Mingus himself, the master.

Self-Portrait In Three Colors can very possibly have been given its title in reference to Mingus' genetic background, where African-American, Scandinavian and Chinese inheritance can be traced. The original can be found on the classic album "Mingus Ah Um" from 1959. The theme is one of Mingus' most beautiful, despite its asymmetrical form and the "treacherous" half-bar. 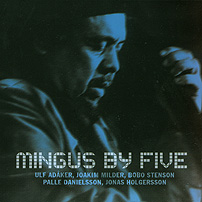