Following Monk By Five and Mingus By Five, the group who gave us those albums now turns its attention to the music of Miles Davis, covering compositions from his first album as leader in 1948, through the years of his most influential albums of the '50s, up until the late '60s.

As a style-setter, group leader and soloist, Miles Davis came to be one of the greatest musical personalities of the last century. Born in 1926, he grew up in St. Louis and in 1944 had already moved to New York where he quickly established himself in the circle of musicians who were to revolutionize the jazz world with the style of playing that was to become known as Be Bop. Charlie Parker was the most spectacular representative of this style and already in 1947 Miles Davis became a member of Charlie Parker’s quintet. This necessitated and made possible a very fast development of his instrumental technique, improvisational abilities and insight into the elements of the new style. He makes his first recordings under his own name the same year, playing four of his own compositions that still remain part of the standard jazz repertoire today.

In 1948 he takes the initiative to form a larger constellation, the Miles Davis Nonet. He collaborates with, among others, arranger Gil Evans and musicians such as John Lewis and Gerry Mulligan who contribute most of the band’s repertoire. The orchestra, though short-lived and not an overwhelming success with the public, is fortunately documented on record and receives much more attention under the broader reference: Birth Of The Cool. Here a new style is established with a more sophisticated harmonic and melodic conception in the arrangements and solos in contrast to the vertical fireworks of the Be Bop era. These recordings become a significant influence for decades to come, in particular on what was to be described as West Coast Jazz. Even in Europe the style is to have a great effect, not least in Sweden with the music of Lars Gullin.

At the end of the ‘40s, Miles has reached a level of technique that can be compared with leading trumpeters Dizzy Gillespie and Fats Navarro but the beginning of the ‘50s is a difficult time for Miles. He falls victim of drug addiction, which seriously threatens his career. A few years later, however, a few recordings appear in which he has discarded the expressive manner of Bop and his melodic style and individual sound begin to gain increasing attention. After a performance at the Newport Jazz Festival in the summer of 1955, he is offered a recording contract with Columbia that enables him to form his own, regular group. It consists of John Coltrane, Red Garland, Paul Chambers and Philly Joe Jones and the quintet becomes in time one of the leading and best-paid groups in USA. The musicians belong to the best of the period and Coltrane in particular develops steadily into a style-setter who is to become of great significance to the future development of Jazz. Miles’ ability to find new talent and, under his subtle leadership, give them the space to develop group dynamics with great individual freedom, is unique.

The original group undergoes changes and important musicians such as Bill Evans and Cannonball Adderley join the band. The music on the album Kind Of Blue from 1959 becomes a milestone in jazz history where the music is characterised by purely modal structures with themes and solos built more on scales than chords. At around the same time the collaboration with Gil Evans is renewed, resulting in three albums: Miles Ahead, Porgy And Bess and Sketches Of Spain, which are issued between 1957 and 1960. Evans’ masterly arrangements for a large ensemble with Miles in focus as soloist belong to the most important works in jazz.

In the mid-‘60s, Miles forms a new quintet that contains some of the most talented jazz musicians of the time: Wayne Shorter, Herbie Hancock, Ron Carter and Tony Williams. Together they develop an intuitive group interplay where a more free relationship to form and harmony, in a sophisticated way, runs at a tangent to the increasingly prevalent Free-Form movement. The original repertoire from Miles’ earlier groups with up-dated Bop themes and standard tunes is replaced more and more by original compositions where, to a large degree, Wayne Shorter’s contributions dominate in both quantity and quality.

At the end of the ‘60s, Miles’ music undergoes a drastic change. New musicians and electric instruments transform the sound picture and an ever-heavier influence from black funk and soul music is adopted, especially in the roles of the bass and drums. The earlier so well-developed harmonic structures give way to modality. With albums like Bitches Brew, In A Silent Way and Live-Evil Miles reaches a new audience, but many jazz enthusiasts have difficulty in understanding and assimilating his new direction. Miles’ health begins to deteriorate and he withdraws and is absent from the scene and the media for five years. When he returns it is with music in the field of fusion, which in its well-produced way finds a public even outside the jazz sector. Miles plays in some of the biggest arenas around the world with bands in which many musicians pass through and he continues up until his death in 1991.

Thelonious Monk and Charles Mingus, whose music comprised the repertoire of our two previous CDs, were both important figures during the era when Miles also consolidated his career. Monk and Mingus were more concentrated as composers and both have produced a sizeable amount of lasting works of which many belong to the standard repertoire of jazz.

Miles in comparison has much fewer compositions to his name but the repertoire that he chose to play has had a great influence on what jazz musicians all over the world consider as belonging to a collective “international repertoire”. Miles has also “adopted” as his own a few tunes that have been composed by others, Four being a well-known example. He has also shared in the credit for themes that he has “arranged” or altered only marginally. When asked how it was to write music with Miles Davis, guitarist John Scofield replied, “…it wasn’t exactly like Lennon & McCartney.”

Of the tunes we have chosen Deception and Budo are from the Birth Of The Cool ensemble’s repertoire. The first is based on George Shearing’s Conception and the latter has mainly Bud Powell as composer. The arrangement of Budo is taken from a recording of the Miles Davis Quintet with John Coltrane in 1955.

Milestones is from Miles’ first own recording in 1948, (it should not be confused with the title track from the later album Milestones recorded in 1958), and is completely his own, as is So What from the Kind Of Blue album. Here our idea was to link together one of Miles’ most harmonically intricate compositions with another quite the opposite.

Swing Spring is a seldom-played Miles tune taken from the myth-ridden session on Christmas Eve 1954 with, amongst others, Thelonious Monk and Milt Jackson. It was released on the album Bag’s Groove.

Florence sur les Champs-Élysées is taken from the music that Miles’ created for Louis Malles’ film Ascenseur pour l’échafaud in Paris. The year was 1957 and Miles had temporarily disbanded his quintet and was touring Europe where he played with local musicians. We use Miles’ solo as the theme.

Miles Ahead is the title track on the first of the three albums that Gil Evans arranged for a specially designed large ensemble with Miles in an exclusive soloist role.

Fran-Dance has also been issued under the title Put Your Little Foot Right Out. Miles is credited as the composer but it’s really a traditional song and his contribution is the use of sophisticated chords behind the melody. The tune comes from a classic LP from 1958, Jazz Track that also contained Miles’ first versions of Stella By Starlight and On Green Dolphin Street.

Circle In The Round was recorded in 1967 but was not released until 1979 when it appeared on a double LP of the same name, where it takes up a whole side. It was made during a period when Miles was searching for a new form of expression and to the quintet was added guitarist Joe Beck. In the album notes it is described as “the jewel of this collection………not quite like anything recorded by Miles before or since.”

Filles de Kilimanjaro is yet another unusual theme and also the title track from an album from 1968 when Miles was searching for ways to depart from the standard repertoire.

Thisness is to be found, never previously released, in the Miles Davis Quintet 1965-68, one of the many boxed sets that have appeared in the last decades containing collections of Miles’ recordings. The tape with Thisness was found in Miles’ home and the exact date is unknown. Miles is rehearsing in a quartet format with probably Hancock, Carter and Tony Williams. The recording ends with a message from the sound engineer that a food order has arrived: “Your sandwiches are here…”

Blue in Green is taken from the cult record Kind Of Blue. The arrangement is built around Miles’ presentation of the theme.

CRITICS
The Jazz Rag No. 101, 2008:
"It's interesting to find the name of Miles Davis, still outselling any other jazz musician, attached to CDs by other artists, though, to be fair, MILES BY FIVE (Touché Music TMcCD 026: 61.17) is not simply a marketing ploy, being part of a series (following Monk and Mingus) from an all-star Swedish quintet. Though trumpeter Ulf Adaker's tightly muted opening to Blue in Green is an obvious hommage to Miles, these performances are not simply re-creations of the Miles Davis Quintet. Many of the more interesting tracks are adapted from obscure corners of Miles' music, like the atmospheric Florence sur le Champs-Elysées, based on a trumpet solo from the film L'Ascenseur pour I'Echafaud, or Thisness, found on a rehearsal tape. The quintet offers inventive solos all round, with Palle Danielsson carrying on the Scandinavian tradition of double bass soloists, though I found Joakim Milder's drytoned tenor sax less appealing than Adaker's trumpet." 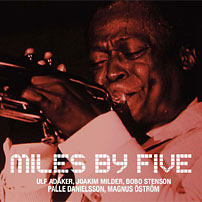