This CD contains music composed by wizard-pianist Anders Persson and drummer Terje Sundby. They present also some of the most beautiful standards from the American songbook as well as a sensitive interpretation of the traditional Swedish song" Beneath The Firmament Of The Sky".

Stockholm October '92
We were sitting in the stalls, relaxing after the show. Suddenly a man walked on stage and sat down at the piano. He played the first notes of a familiar piece, I didn't know what time it was.

You never know when that special moment will come along, when you forget about yourself and your surroundings, when time stands still. You can pay money to see a show, but that magical thing, that thing you are really longing for, may never happen.

For me it happened that night, after the concert had finished. He just played a couple of standards, songs I'd heard many times before. But this was different. He played them so simply, so softly, with a personal touch that was so expressive. I was blown away. I didn't know what time it was,' round midnight - it doesn't matter. When you hear music, real music, you don't care about time, all you care about is the music. I will never forget that moment.

Listening to this album, I realize it's happening again. And this time it's even better, because the performers are Terje Sundby, a wonderful drummer and composer, Palle Danielsson, who influenced not only me but other musicians and music lovers all over the world with his outstanding artistry, and the piano player who turned my world upside down that night in October '92, the wizard, Anders Persson.

CRITICS
Shane Nichols in Australian Financial Review:
"This is a Scandinavian label that seems to specialise in eminently listenable jazz. With the right artist and choice of material that need not be a bad thing for real jazz lovers. As is the case here.

Persson, in company with the seasoned bassist Palle Danielsson and drummer Terje Sundby, has made a fabulously absorbing and very beautiful record here. Sprinkled with some standards and a bunch of originals - including the title track, which probably sounds more exotic in his native tounge - the disc is at once yotally accessible and yet profound.

Persson wanders into dissonance occasionally and is constantly in dialogue with his sidemen - this is a very switched on album of improvisation matched with subtlety of touch and great ambience. There is no anguish in this music, simply a constant flow of thoughtful lyricism. After a hard day, this will soothe anything." 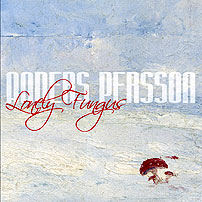