On this CD you can enjoy a most excellent and expressiv acoustic group with four excellent Swedish musicians who really know how to combine influences from jazz and world music into a dynamic and colourful mix. The program is made up of eight compositions by musician/composer/arranger Jonas Knutsson, one is a Swedish traditional attributed to the Swedish fiddler Lorns Anders Erson and arranged by Jonas Knutsson/Björn Ståbi and one composed by George Gershwin.

Five years have gone by since I last recorded a CD under my own leadership. After these years of musical collaboration with others I have felt a desire to once more make an album of music originating from out of my own head.

During the last part of the '90s I have taken a much deeper interest in the Swedish folklore tradition and have experimented with different methods of arranging and composing within the area of Swedish folk music and world music, while at the same time playing quite a lot of jazz.

I have been very fortunate to have had the opportunity of collaborating with fantastic musicians and bands, such as Berger Knutsson Spering, Triptyk, Stockholm Folk Band (together with the multi-instrumentalist Ale Möller), the French drummer Bertrand Renaudin's group L'arbre Voyage, as well as singer Lena Willemark and keyboard player Mats Öberg.

So now I have realised my ambition to form a small acoustic band with musicians who can combine influences from jazz and world music into a dynamic and colourful mix. It gives me therefore great pleasure to present:

ANDERS PERSSON, who has for a long time been one of my favourite pianists. So lyrical. His harmonic conception provides the necessary shadings and excitement to the melodies while giving the music a scent of Scandinavian jazz.

SEBASTIÉN DUBÉ has much experience from the world of classical music, which makes him an expressive melodist, and he combines this with his love of jazz, grooves and folk music. In fact he himself is all music!

RAFAEL SIDA, an impassioned musician with a lot of soul and "groove" in all he does. Through his wide experience he has formed his own percussion set-up which is a combination of a conventional jazz drum set and an a collection of ethnic instruments which gives the music a special touch.

The music on this CD was recorded in under five hours. Eight of the tunes were recorded on the first day and one on the second. In a way they feel rather like photographs all taken on the same occasion. The music is played with the same flow of energy as at a concert, live in a studio without overdubbing and with a minimum of extra takes.

While making this recording we discovered our collective sound in Studio La Buissonne together with sound engineer Sylvain Thévenard. We experienced all this together in sunny Provence during a period when Sweden was cold and under a blanket of snow.

Finding words to describe instrumental compositions is not easy but a key to the compositions can be that they represent attempts to find a fruitful way of combining my influences from jazz with different kinds of folk music.

Already back in 1980 I became a member in the band Cabazz. It was my first experience of playing in a band with original music. We played music inspired by Weather Report, Miles Davis' later productions, Frank Zappa and the Swedish band Kornet among others. It was in jazz-rock and fusion that we found the enthusiasm to experiment with an open-minded attitude to the music of other cultures and traditions.

In a way this is still what I'm doing today. It is just the perspective and ingredients that are different.
Welcome into the music!

FLY AWAY
To my late father.

HORN STREET
One of Stockholm's longest and least attractive streets. Painfully beautiful in the afternoon sun. This is where I live.

I LOVES YOU PORGY / ON THE LEE SIDE
One August night at the Gaume Jazz Festival in Belgium I was standing in a tent listening to Toots Thielemans who was playing "I Loves You Porgy". His lyrical harmonica made me rediscover the tune and I wanted to play it again. Here it is coupled to "On The Lee Side" which is one of my compositions, inspired by the view from the kitchen window of the summer chalet of my childhood.

ÄNGLAR (ANGELS)
Three themes which work together both forwards and backwards. Here it is forwards. We never decide anything before we play this tune. Whoever wishes can choose whichever theme whenever they feel like it or play freely -or just not play at all.

THE KANGAROO WOMAN
I met her in a dream. The rhythm is a kind of Brazilian Baiao hybrid, inspired by impressions I received during a tour I made in Brazil some years ago.

TRÄDET (THE TREE)
This tune is actually composed for a musical I am working on together with script writer Anette Skåhlberg. The scene concerns a boy who is running away from home and who seeks shelter and rest under an old tree. In a dream the tree sings this melody for him.

EINE KLEINE MÄRZ MUZIK
The composition derives from Sebastién's bass figure which builds the groundwork for the sax melody which in its turn is inspired by the jojk-singing of northern Lapland.

SMILES
My favourite rhythm is 6/8. Rafael has the ability to play it in a way so that the rhythm feels like a melodic phrase rather than a mathematical one. The melodies are inspired by, amongst others, central African Pygmy music and the traditional Swedish waltz.

LORIKEN
Polska attributed to Lorns Anders Ersson. The traditional folk music fiddler Lorns Anders (born in 1846) from Orsa is also known as Herrpes Anders from Kyrkbyn. In the parish registration books it was noted that "stable hand Herrpes Anders Ersson was of a particularly wild nature". He was sentenced to prison for insulting a public servant and for throwing a stone through the window of the "länsman" ( head of the county constabulary). When he emigrated to America in 1870 he is said to have stood on the deck of the steamer playing a folk tune when he was to be rounded up by the länsman. I was deeply moved by the raw strength in this tune which I have been able to learn from folk fiddler Björn Ståbi, who also gave me the counter-melody.

Special thanks to Laila and Charles Gavatin of Touché Music in Stockholm for having the same ambitions as myself to make this CD, Sylvain Thévenard for the beautiful sound, Nicolas Déflache, all the people at Studio La Buissonne, Bengt Berger, Kristin Lorentzon and Sture Knutsson. And Nina.

Very special thanks to the musicians: Anders, Sebastién and Rafael for their beautiful playing and for making my music shine.

Randy McElligott in Jazzreview.com:
"A few years have passed since Knutsson recorded as a leader. During those years he has been developing his skills through writing, arranging and exploring Swedish folk melodies. A quartet setting comprises this latest effort."

"A welcome return to form from Knutsson and the rest of the band. This is one exciting session. Much to appreciate and listen to. Twists and turns throughout, thoughtful playing and a keen sense of arranging make this a celebration to enjoy." 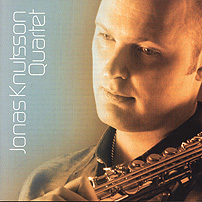 This CD is produced with financial support from The Swedish National Council for Cultural Affairs.