This music was recorded live on two late summer nights at Castle Hotel, known internationally as the home from home and meeting point of visiting jazz musicians in Stockholm. On stage were trumpeter Gustavo Bergalli, pianist Knud Jørgensen, who also arranged the music, and bass player Bengt Hanson, in an intimate chamber music atmosphere with the emphasis on ballad playing.

Knud Jørgensen's and Bengt Hanson's paths have crossed frequently since they began playing duo at the end of the 1970s, and in 1983 they released "Knud & Bengt at Maxim", produced by Laila and Charles Gavatin, who were also the producers of this record. Gustavo Bergalli has usually been heard in other connections. Such, however, is the symbiosis between these three musicians, they could easily be taken for a permanent trio.

Knud Jørgensen was born 1928 in Copenhagen, where at the age of 16 he made his first appearance as a pianist in a Nyhavn restaurant. Before moving to Sweden in 1954 he had, among other things, stood in for some considerable time for the Danish jazz pioneer Leo Mathiesen in Mathiesen's own band and performed with the then well-known Harlem Kiddies. Since then Knud has played with most of them - Ben Webster, Ella Fitzgerald and the avantgardist Eric Dolphy included - though for the most part he has had small groups of his own. The rythmic vitality and wellcrafted harmony of his playing was inspired by Duke Ellington, Hank Jones, Oscar Peterson and the Swedish pianist Jan Johansson.

Bengt Hanson was born 1944 in Stockholm, son of a bass player. He started off playing guitar but, at the age of 15, changed to his father's instrument. From his teens and until well into the 1970s he played with the Swedish Jazz Band, or the East End Jazzmen as they initially styled themselves. For a few years in the 1970s he also had a quartet of his own, which among other things launched the Swedish tenor saxophonist Nisse Sandström. Together with Knud Jørgensen, Bengt has performed with several guest soloists, among them trumpeter Harry "Sweets" Edison. As a bass player, Bengt has been profoundly influenced by, among others, Jimmy Blanton, who revolutionised bass playing around 1940, as well as Ray Brown, Paul Chambers and George Mraz.

Gustavo Bergalli was born in 1940 in Buenos Aires, where as a teenager he started off with Louis Armstrong as his guiding star in twenties-inspired groups as the Royal Garden Jazz Band, and the Dixieland Smugglers. He gradually played his way through the history of jazz, and collected enduring impressions from Roy Eldridge, Dizzie Gillespie and, above all, Clifford Brown. In his own warm and well-articulated playing one can also perceive an echo of Bix Beiderbecke, Chet Baker and Miles Davis.

In 1975 Gustavo moved to Sweden where he has been heard in a number and variety of bands as the Swedish Radio Jazz Group and the Gugge Hedrenius Big Blues Band. Gustavo also has a quintet of his own, and he frequently tours internationally with this and with other groups. He has taken part in a number of recordings, both in his own name and those of others. He features, for example, in several records with the Klaus Ignatzek Quintet together with Claudio Roditi, and in an album which alto saxophonist Lee Konitz made in Stockholm 1983.

The music of the present record is sustained by clearly delineated, unforgettable turns of phrase. The steady tempi provides scope for reflective playing, in which impulses and ideas have time to develop and join together, instead of - as so often happens - putting one another to flight.

Playing jazz without drums is a challenge requiring every player to assume something of the drummer's task of both rhythmic anchorman and propeller. In particular this applies to the bass player, because, in addition to drawing the contours of the chordal sequences, the bass also has to express the beat and be the backbone of the music.

Jazz at all times has fed on the blue ethos, not least where poetically and emotionally charged ballad playing is concerned. There is a distinct blue tone colour which hover over Gustavo's, Knud's and Bengt's style of playing. Sometimes, as in "Lover Man", that bluest of ballads, this quality is built into the actual melody.

Ballad can mean a variety of things in many different connections, ranging from the poetry of medieval chivalry to jazz music. In jazz, a ballad is a lyrical melody in a slow or moderate tempo with a harmonic structure which provides an inspiring basis for improvisation. Many such melodies have been around long enough to qualify for evergreen status. Some of them were not really written by or for jazz musicians at all, but jazz interpretations of them have been legio ever since the end of the 1920s, endowing them with new dimensions.

At the time when many of these melodies were written, jazz hade a natural footing in the entertainment industry and was frequently indistinguishable from other "popular" music. Four of the tunes in this record, though, were written both by and for jazz musicians. "What's New" was composed by Bob Haggart. "Day Dream" from 1940 is composed by pianist and arranger Billy Strayhorn, often called Duke Ellington's alter ego. The melody has a verse, rarely played, which Knud employs here as a piano introduction in free tempo. The performance ends with a phrase from "Serenade to Sweden" by Ellington. "Lover Man" was composed in 1942 by the pianist Roger Ramirez, and "Angel Eyes" in 1953 by the arranger Matt Dennis.

Pianist and band leader Willard Robison and his English colleague Ray Noble both operated in the border zone between jazz and popular music. Noble wrote "The Touch of Your Lips" in 1936, but he is perhaps best known as the composer of "Cherokee". Robison, who wrote "Old Folks" in 1938, was a big name in the twenties and collaborated with musicians as Bix Beiderbecke.

In fact, it is only the three remaining melodies which, to begin with, did not have jazz connection. Two of them were written by Jerome Kern for Broadway musicals: "Look for the Silver Lining", from 1920, figured in "Good Morning, Dearie", and "Yesterdays" from 1933 was included in "Roberta", which was also filmed, starring Fred Astaire and Ginger Rogers. Richard Whiting's "My Ideal" was written in 1930, when it was sung by Maurice Chevalier, both for a gramophone recording and in the film "Playboy in Paris".

So the inspiring moments caught on the wing in this recording employ a wide variety of material. And the trio setting without drums brings out the soft-spoken but by no means anaemic lyricism which is the theme of this record.
Albrekt von Konow
Translation: Roger Tanner

Cadence, November 1997:
"The ghost of Chet Baker looms heavily on the splendid set of chestnuts from this Scandina-vian drum-less trio led by lyrical trumpeter Gustavo Bergalli."

"This CD is a real gem - a live set recorded in techno-audio, with some unusually beautiful voicings by the trio - and is too good to pass over."

"The influence of Chet Baker is obvious, but Bergalli is too good to simply copy: His style is distinct, with its own subtle twists and idiosyncrasies. Like Baker he uses space to great effect and favors soft fluid lines but with a somewhat more ragged sound."

"Angel Eyes, played at a turtle's pace, is lush and luscious, pulling at the heartstrings, with a lovely piano solo. Bergalli chirps through his horn and the angels sing. Similarly, "Look for the Silver Lining" begins with a beautiful rendering of the melody by the leader, followed by a delicious bass solo (accompanied in part by trumpet!), and finally wondrous outings by Bergalli and Jorgensen."

"Day Dream has aged well, and this CD should appeal to aficionados of ballads, the sound of Chet Baker, and a plush, quiet, swinging Jazz."

Jazz Journal, June 1996:
"Danish keyboard veteran Knud Jorgensen, frequently on call over the years for visiting American stars but even better known for his own small groups, is partnered on this occasion by the Argentine Gustavo Bergalli... "Illustrious trumpet forebears such as Miles Davis, Dizzy Gillespie and Chet Baker are advanced in the liner notes as main influences, but in Bergalli´s warm tone and gentle lyricism I found much more affinity to the Bobby Hackett tradition..."

"The pianist and veteran bassist Bengt Hanson first recorded in 1971. Bergalli melds with them so well here that this has the sound of a long-established trio."

"The Argentinean impresses immediately in an extended takeout of the everengaging What's New, which gets the album off to a solid start. Kern´s Yesterdays, taken at a quick lick, is among the best tracks, and Hanson contributes an elegant solo. Bergalli is dreamily muted on the seldom-played Old Folks (which I seem to remember was one of Hackett´s own favour-ites."

"Good taste and good musicianship throughout, which lovers of good ballads in small-groups setting should enjoy." 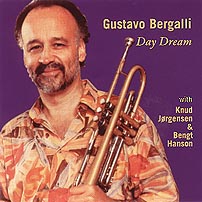