Anders Lindskog has been one of the most distinguished tenor saxophone players in Scandinavia since the 1960's, playing with a fresh sense of rhythm, fine phrasing and a curiosity for new ideas when improvising. Åke Johansson's Trio, a trio of world class, gives him perfectly balanced support. Jazz music such as this - for example "Blues Changes", "Tickle Toe", "Angel Eyes" and "The Man I Love" is immediate and timeless.

This is the tenor saxophonist Anders Lindskog's second record under his own name and it is all of twenty years ago since the first. Although he is not the kind of jazz musician who makes the headlines - very few ever do - he has for quite some time now occupied his own special niche in that world where jazz is held in the high esteem. In recognition of that fact he received from Laila and Charles Gavatin's Foundation for Jazz Music an award in 1994. This foundation has also been the corner-stone in the production of this long-awaited CD.

Anders is a musician steeped in tradition and musically related to the great stylists as Lester Young, Dexter Gordon, Stan Getz and Gene Ammons. The atmospheric presence, which this record communicates, is a good representation of the impression he gives on stage: a musician at one with his instrument in total concentration. He stands with his eyes closed and knees slightly bent as if ready for countdown. But whatever the tempo he remains almost motionless while the music takes form and expands. There exists an artistic grandeur in his playing, genuine and passionate, at the same time containing a moving undertone of sadness and pain which engraves his musical statements with an unmistakably personal signature.

Anders was born in Örebro in 1940 and after having received elementary tuition on the piano and clarinet he devoted himself to the study of jazz and the tenor saxophone by playing along with records. When in 1983 he lost the little finger of his left hand it appeared as though his symbiosis with the saxophone had come to an abrupt and irreparable end. But a resourceful instrument mechanic succeeded in adapting the key system making it possible to play with the remaining nine fingers. For Anders this meant naturally that he had to un-learn the old system and work diligently on a new one.

During the recent years he has worked with Gugge Hedrenius' Big Blues Band and the quintets of Lars Sjösten and Maffy Falay.

On this recording we hear Anders together with pianist Åke Johansson's trio which for many years has been one of Sweden's leading small groups often heard in the company of Chet Baker. Born in 1937 Åke is considered one of the outstanding Swedish pianists in the bebop tradition. Possessing a strong personal mode of expression he seems to have a way of revealing the innermost secrets of chords and their harmonic mysteries. As a soloist he is particularly rich in ideas and in all situations maintains a continual flow of melodic lines in which he succeeds in excluding all unnecessary musical digressions.

Since 1977 Kjell Jansson, born in 1950, has been the backbone of the trio, his driving bass lines providing a distinct and buoyant pulse. Drummer Magnus Gran, born in 1964, has since spring of 1995 been the group's foundation and propelling force and plays with great attention to dynamics and detail.

Seven of the tunes here are evergreens, mostly ballads. The musicians show a remarkable insight for the particular character of each ballad and form their interpretations accordingly. In all these numbers one notices the striking effect of diversity and contrast between Anders' song-like variations on the themes and Åke's more complex solo excursions. A good example of this is in "Old Folks" where after Anders' interpretation of the melody, in which he remains in proximity to the original Åke takes off on one of his characteristically inspired journeys. When Anders returns later to the original mood he does so with his own ingenious paraphrase of the melody. In all the ballads on the record one discovers similar methods of improvisations in varying degrees, one in particular being the fascinating way in which Anders approaches his first chorus after the theme statement of "The Man I Love".

In the blues and up-tempo numbers where the lyrical qualities are not so prominent the improvisation is concentrated on the chord sequences. The medium-tempo "Blue Changes", which was recorded by Miles Davis in 1956, has in fact no written thematic statement but consists of a blues sequence containing certain harmonic alterations as a basis for improvisation.

The up-tempo "Israel" has as its origin Miles Davis' 'tuba band' of 1949 and is a twisting minor blues theme, which acts as a launching pad for each soloist in turn. Anders begins with six choruses, followed by Åke with five, and the Kjell takes up his bow to play four exiting choruses of bass 'arco'. This is followed by Anders and Åke playing a row of hard-driving and stimulating 12-bar exchanges with Magnus.

"Falling in Love with Love" and "Tickle Toe" - Lester Young's famous feature with the Basie band of 1940 - are also played up-tempo. In both numbers after the theme Anders takes to the skies in an ever-upward spiral of ideas and Åke's amazing responses prove that he is not a man to ignore a challenge, while Magnus creates a rhythmic whirlwind. In "Falling in Love with Love" Kjell plays another outstanding bowed solo and in "Tickle Toe" Magnus plays an articulate drum solo followed by a dialogue of eight bar exchanges with Anders.

Here we have an example of four improvising jazz musicians all with stories to tell ranging from the reflective and poetic to the exciting and colourful.

When it came to making choice between the different versions of each tune it was the degree of swing, soul, spontaneity and inspiration that was the deciding factor. It is an audible fact that each musician plays his instrument with sincerity and honesty. This is music, which grows and reaches new dimensions on each listening.
Albrekt von Konow
Translation: Dave Castle

Cadence, January 1998:
"Lindskog is a masterful mainstream player with echoes of everyone from Lester Young and Ben Webster to Stan Getz and Joe Henderson..."

"[...] a remarkable melodist and improviser who deserves a much wider audience than is obtain-able in Sweden. The same may be said for his colleagues, especially the superb pianist Johansson who not only comps with intelligence and taste but also adds an extraordinary solo voice to the mix. As for bassist Jansson and drummer Gran, they are consistently reliable and rocksteady."

"The program displays a Swedish temper, basically slow-moving and contemplative with four medium-tempo numbers [...] among half a dozen ballads."

"It's hard to believe this is only Lindskog's second recording as a leader of his own group."

"In a more equitable world, he would be a poll-winning superstar."

Jazz Journal, July 1997:
"Lindskog is a soulful but self-effacing artist in the Lester mould who enjoys a solid reputation among Swedish jazz fraternity...."

"His ballad playing is enjoyable selection, prefaced by the Ray Bryant blues chord sequence recorded by Miles Davis in 1956, is quiet, controlled, undemonstrative but very moving, with the occasional hint ('Time After Time', for example) of that fragile tentativeness we associate with Lester's later ballad work."

"The much more extrovert Ake Johansson, one of Sweden's finest exponents of the bop idiom, makes the ideal partner."

"Lindskog, whose natural element is clearly the romantic ballad, usually sticks pretty close to the theme, whereas Johansson's method is more exploratory and the two styles (well illustrated for example in 'Cry Me A River' work very well together."

"In more upbeat numbers like Tickle Toe or Israel, the tenor man's approach is more akin to that of Getz or more latterly Spike Robinsson."

"Jansson, bassist in Johansson's trio for the past 20 years, makes excellent use of his solo space and the much younger Gran propels the unit forcefully but without fuss."

"Playing time, as generally on these Touché issues, is generous." 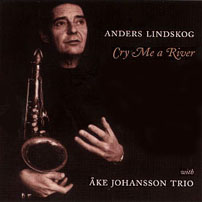