The female singer Lina Nyberg interprets the music of, amongst others, Dave Brubeck, The Beatles, and Monk in her own very personal way. Together with the sometimes aggressive, sometimes reserved, piano playing of Esbjörn Svensson, Lina becomes a brave young creator of ballads.

It is easy to say that a musician must be himself - or herself. Indeed, only too easy, to the point of sounding rather suspicius. And yet - musicianliness - that's what it's all about.

Lina Nyberg is a vocalist, but more than that. She doesn't just interpret melody with her voice, she controls the musical process, harmonies, rhythms - everything in fact, because everything means something for substaining the expressive quality of the music. She arranges her material, leads a quintet of her own and for three years she has collaborated with pianist Esbjörn Svensson as a duo.

Lina Nyberg's music is her own, even if others have sung it before her. That is most often the case, but not always. Close, the title piece of this record, bears her signature, and she wrote the lyrics for Esbjörn Svensson's two compositions, Waltz for the Lonely Ones and Waiting. Otherwise she sings music which is far older than she is. Lina Nyberg was born in 1970. To her generation, jazz music must have been anything but the obvious choice.

And, anyway, "jazz music" - the expression feels like a kind of monument made up of classics, style and masters, all of them born to greatness. In the case of people who made this music their own thirty, fourty or fifty years ago, their love must have turned into such a monument. But to young persons in the 1980s who found their way into this speckled music, curiosity and appetite cannot be put down to veneration of standing monuments. I think many people found their way there by coincidence. The funk and soul of the 1960s, for example, underwent a revival, that in turn pointed further on, and "jazz", of course, has become a way of life in circles. Listeners advancing from that point obviously hear different things from earlier generations. The same music, but different.

Quite clearly, Lina Nyberg has a new way of hearing things, and above all, her musical landscape was much broader, bigger and no longer confined within given boundaries. Genre was secondary, music primary. Oddly enough, listening to jazz came naturally to her, and when she wanted to become a musician, that was the only kind of music that counted. Her ambition was strengthened as a music student in a Stockholm high school, together whith enthustiastic class mates, most of whom also became jazz musicians, and with inspiring jazz educationalists for teachers. Next came studies at the Royal College of Music, and while there Lina Nyberg gave performances with Fredrik Norén, Bernt Rosengren and her own quintet.

Influence? Perhaps something more like inspiration. Intermittenly she has listened to others such as Ray Charles, Bessie Smith, Jimmy Rushing, Joe Williams and Nancy Wilson. Nearer home, Nannie Porres, Monica Zetterlund and Claes Janson are the first names she mentions. No particular vocalist, in other words, has been her guiding star. And as a jazz musician she no doubt listens just as much to instrumental players, such as Lars Gullin - the lyrical and Nordic! But influences? Well of course, different musicians have different experiences to draw on. And Lina Nyberg fashions her compositions into individuals: they have a unique expression and are example of nothing but themselves. Her art, her music, her singing are full of contrasts. Powerful climaxes and sudden changes put force and life into pieces from the blues and soul repertoire. She devours the music vocally. But on the other hand, there is also the wonderful, sculptural beauty of her ballads. Sensuous dreams of beauty. And her ingeniuos treatment of standards: a piece by Monk is performed, not because it is by Monk but because of the musical liberty it confers (yes, strictness in it's unpredicability is the gateway to liberty).

The melodies, of course, belong together with the words. An uninteresting lyric won't make a good piece, but on the other hand Lina Nyberg brings out the new meaning in the lyric, she listens to associations in the sounds. Hints more than statements. The expressive quality is a product of the whole.

Pianist Esbjörn Svensson is essentially idiosyncratic, one of the few who are in close personal contact with their playing. Like Lina Nyberg he moves, as it were, inside the music. It is instantly recognizable, like the outline of a familiar shadow on an evening walk. He was born 1964, and jazz was not an obvious part of the times for him either. But the rapprochement knows no bounadaries. Rock, pop, jazz and funk fuse together, giving a form of expression in which the differences are outweighed by the similarities. He is an unusual pianist, with his playfulness and unpredictability, but he is an even more unusual accompanist. In fact I wonder whether there is any point in calling him an accompanist at all. The two of them - Esbjörn Svensson and Lina Nyberg - are both, in equal mesure, soloists. Unawed by the singer, he takes his own initiatives, with sudden, forceful outbursts and abrupt changes of direction. She is allowed no peace and ventures forth on voyages of discovery in which he has to be on his guard. Just listen to the pauses, how their empty space delineates contours of different thicknesses for melodies and rhythms. Lina Nyberg and Esbjörn Svensson have to concentrate on each other completely. Perhaps the duo is the barest and most demanding form of playing together. And the most intense, because you cannot hand over to somebody else if your ideas run out or hide behind other people's inventions if second-hand learning is all you have left. Being clever doesn't come into it: expression is the thing. Jazz music is indeed traditional but musicians can assimilate it according to their own experience. Jazz is also a repertoire of innumerable familiar tunes which have been played and sung by musicians the world over, for decade after decade. Standards, blues, ballads. But repetition can easily make the force of habit paralytic. And yet repetition is the precondition of what is shared and profoundly personal about the music. Habit is also a challenge to the artistic will to expression, it demands change and intensification of personal musical statements. Openness and a desire for the music never to represent anything but the musicians themselves. I think this has to do with desire. It is easy to say. And so we end as we began, with being oneself... and really - listening!
Thomas Millroth

"Nyberg is not a straight ahead singer. She purrs coquettishly and plays tricks with her voice, bringing in gospel and folk accents."

"There is a shockingly raucous, show-stopping blues performance on "You Let My Love Grow Cold."

"Nyberg [...] sings with utmost confidence, her voice rich and fluid, her understanding and interpretation of the lyrics and her phrasing all faultless."

"Svensson [...] is a gifted player, inventive, supportive, listening all the time and frequently boosting the singer with unusual and possibly unexpected (to her) touches."

"Sound is excellent and the piano sounds like a very good one."

"[...] I like this a lot and recommend it to members of JJI´s Friends of Good Songs Society." 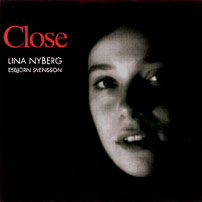