Knud Jørgensen proves what a harmonically talented pianist he was. Bengt Hanson (bass), supports him with solid and flexible playing, full of ideas. Nine standard tunes, including "Sophisticated Lady" and "The Touch of Your Lips", all give proof of what a fine duo they where. This is intimate and witty jazz in the small format, recorded in March 1983 at Maxim in Stockholm. Sadly, Knud Jørgensen died in 1992 and this CD is a homage to him.

It was by chance that the pianist Knud Jørgensen and the bass player Bengt Hanson met at the end of the seventies. Bengt was a member of a band in which Knud made a replacement at short notice, and it was immediately felt as if they had been playing together for a long time in great musical understanding. Some time later, Knud called Bengt to do a two-man gig, and thus the Knud & Bengt duo was established. For a number of years they then played off and on in several Stockholm restaurants, among them Maxim, where this music was recorded in March, 1983. Laila and Charles Gavatin produced the record that was released the same year.

Why stick to the duo format? "We became a unity and got to know each other so well that a look or expression from either of us in the course of playing would be enough to have us agree on the development of a certain passage", says Bengt Hanson. "Our playing seemed obvious to us and we never felt the need for a third player. It would also have been hard for such a player to join this unity, and it wouldn't, to our way of thinking, have added anything to the music".

It may be that the piano or the grand piano is the instrument that may the most be equated with an orchestra and that the double-bass is the backbone of the rhythm section, but Knut and Bengt's playing is formed as duets instead of piano music with bass accompaniment. It can be likened to a spontaneous dialogue on equal terms between two musicians who have something to say to each other without mincing words. Thus it is both a living and vitalizing conversation rife with whimsy and challenging repartee, in which the rule is to swiftly deliver your riposte. In one point, this metaphor may falter: in music it is allowed and even important to interrupt, and Knud and Bengt keenly comment on and complete each other. Within the boundaries of har-mony and rhythm in each piece, anyone may have the floor, and the intimacy with the form itself is the only safety net any improvising jazz musician has.

The repertoire consists of tried-and-true pieces. Some stem from Broadway, e.g. Sigmund Romberg's minor-key Softly as in a Morning Sunrise, which was included in the operetta The New Moon in 1928, and Richard Roger's My Heart Stood Still, written in 1927 for the production of A Connecticut Yankee and, decades later, recorded by both Art Tatum and Bud Powell. Broadway was also the starting-point for Cole Porter's What is this Thing called Love, which was included in Wake up and Dream in 1929 and formed the basis for Tadd Dameron's be-bop piece Hot House in the forties. Henry Mancini's Days of Wine and Roses from 1962 was written for the film with that title and the piece was awarded an Oscar for the best film theme.

The rest of the repertoire consists of independant tunes. The harmonically refined Sophisticated Lady from 1933 was Duke Ellington's first great hit. In 1940 he also wrote Bojangles, a musical portrait of the legendary tap-dancer Bill "Bojangles" Robinson. Two other band leaders famous in their day are the composers of a tune each from 1936, Isham Jones of There is no Greater Love and Ray Noble of The Touch of your Lips. She's Funny that Way was composed by Neil Moret in 1928, while the more celebrated Richard Whiting, who is often mentioned as its initiator, for once had to be content with writing the lyrics.

With the exception of She's Funny that Way the music is played here in a medium tempo or somewhat faster. This is even true of Sophisticated Lady, which is performed in double tempo after the presentation of the theme. It is especially in Softly as in a Morning Sunrise and Bojangles that we notice with what playful simplicity Knud and Bengt compensate for the absence of drums: Knud has a powerful impetus and sting to his playing, and Bengt shows with with all the clarity one could ask for how his bass can replace a whole rhythm section.

The cooperation between Knud and Bengt was abruptly ended when Knud unexpectedly passed away in 1992. But the duo's music is far more than a memory of bygone days. The spontaneous expression, joyful playing and the creative power itself lend such a tangible immediacy to the music that one actually imagines that one can see the duo before ones eyes. Not least the undeniable musician and joybringer Knud Jørgensen on the piano stool, hands dancing over the keyboard and feet keenly beating the rhythm. The inspiring moments that have been captured here convey an iron sense of life each time the music is played.
Albrekt von Konow
Translated by Isabel Thomson

"Bassist Hanson is equally fluent and hard driving, with a superb tone."

"There is outstanding rapport between both artists"

"The spirit of Duke and Blanton lives with Knud and Bengt!" 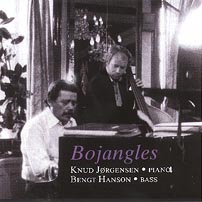