The double-bass player Kjell Jansson, an established jazz musician from the west coast of Sweden, demonstrates convincingly here that he is also a prolific and talented composer. Kjell, together with his colleagues Åke Johansson (p), Gilbert Holmström (ts), and Leroy Lowe (dr), and on one track Gunnar Lindgren (ts), play a selection of twelve original compositions which bear the hallmark of the robust jazz tradition of the '50s and '60s. Recorded in June 1998 in Kungälv..

"It is not only the fact that his fingers run around like spiders up and down the bass strings, but in his position between the piano and drums building up the backbones of the music, he is himself the spider in the web which is being spun by the threads of harmony and rhythm. His lively bass lines give the music contours and direction."
(Albrekt von Konow writing about Kjell Jansson in Orkester Journalen 7-8/1966)

KJELL JANSSON has for a couple of decades now been providing jazz groups, above all those in and around Gothenburg, with swinging, driving, steady and, not least, imaginative bass playing. He has been the rhythmic and harmonic corner-stone in such groups as Mount Everest, Opposite Corner and the Åke Johansson Trio. He has, in other words, belonged for some time to the foremost individuals on his instrument, both as an accompanist and soloist. Not least his solos using the bow have delighted such guests to Sweden as Chet Baker, James Moody and Toots Thielemans when playing together with Åke Johansson's Trio.

Kjell was born in 1950 and grew up in a time when pop and rock was the music of youth. It was as a fender-bass player that he first began to become known among the younger musicians in Gothenburg, particularly those interested in blues/rock-influenced music. Around 1970 he began to play modernistic fusion-jazz with Mount Everest, which at that time was a somewhat electrified group but which with time became more acoustically inclined. In the process Kjell began increasingly to play upright bass, at the same time becoming firmly acquainted with the strong jazz traditions of the 50's and 60's, made up in the rich mixture of standards, blues and bebop, which is also the hallmark of the music on this CD.

Less well known is Kjell the composer, but one can also hear ample evidence of his proficiency in this area, with his strongly melodic lines to which one can easily imagine words being sung. This has proved to be especially appropriate on the occasions when he has composed children's songs for concerts in schools. Many of his compositions are lyrical, some almost having the character of hymns.

It is therefore particularly gratifying that Touché Music have taken the initiative to produce a recording in Kjell Jansson's name to give greater attention to this excellent musician and composer. As for his fellow-musicians he has chosen the very best, all of them former colleagues from Mount Everest and Opposite Corner, who after years of playing together know each other inside out. Gilbert Holmström, whose tenor sax has over the years been involved with rather more free and experimental jazz forms, has returned to the fertile ground associated with the golden era of the '50s. On one track, the lyrical "Blind Faith", the music seems to have been written with the special, almost sacred sound of Gunnar Lindgren's tenor sax in mind. Åke Johansson, with his ever-sprightly bebop piano is a delight to hear throughout the whole record.

Drummer Leroy Lowe and Kjell Jansson's rhythm section partnership goes back as far as to the middle of the '70s when they where both members of Eje Thelin's quartet, as well as the many years the played together with Opposite Corner. Those experiences provide a guarantee for the highest level of teamwork.
Jan Bruér
Stockholm, October 1998
Translation: Dave Castle

Jazz Journal, May 1999:
"It certainly is amazing to see the quantity of musicians who emanate from Sweden and have done this since the visit of Stan Kenton Band and the adoption of the country as his home by Stan Getz in the 1950s. With this driving quartet the musicianship is of the highest level and the compositions are just right; in fact, despite all the tunes being originals, you could almost swear that you'd heard them before, so natural is their construction. They are the work of the leader, the excellent bass player Kjell Jansson. Although all of the band solos at length it is the tenorist Holmstrom and pianist Johansson who most influence the shape of the music which, although ultramodern, is very much at the cool end of the scale and easy to the ear. Both tenorists make a good instrumental sound, so the ingredients are very acceptable to the ears that are in line with modern improvisation." 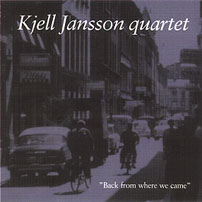 (All compositions by Kjell Jansson)