After an absence of nearly ten years from the scene, singer Agneta Baumann makes a welcome come-back. This is a musical self-portrait of artistic stature which is at the same time an open personal statement, as revealing as though the words were spoken in confidence. She presents such standards as "More Than You Know", "The Party's Over" and "The Best is Yet To Come".

This is singer Agneta Baumann's come-back after an absence of nearly ten years from the scene; a musical self-portrait of artistic stature which is at the same time an open personal statement, as revealing as though the words were spoken in confidence.

Up until the middle of the 80's Agneta Baumann had become established not purely as a jazz singer but more as a jazz-influenced artist-entertainer had in the glamorous environment of late-night dinner/dance restaurants. She was born in the town of Kalmar in south-eastern Sweden where as a youngster she sang in the school choir and as a teenager in the school jazz band, as she happened to prefer Anita O'Day to Elvis Presley. Later in life she also came to appreciate the artistry of Sarah Vaughan, Carmen McRae and Billie Holiday.

But it was not until after some years spent in other working activities that music took a central role in her life. During a period in the travel-agent business in Copenhagen 1965 she began to sing with The Golden Girls, a popular group in the style of The Supremes, and after an engagement in Stockholm 1968 she decided to stay and branch out on her own. During the following years she toured throughout the country and abroad with her own constellation "Agneta Baumanns Orkester". From the later part of the 70's she also often sang together with the jazz pianist Knud Jörgensen, who taught her what is perhaps the most important thing of all, that the space between phrases is also music, and that you have to mean what you sing.

In 1986 Agneta's husband tragically died and in her bereavement a dark shadow of silence fell over her singing career. It wasn't until the autumn of 1995 that she broke the long silence and began to build up her own forum once again in Stockholm. She established regular late-night sessions under her leadership in restaurant environments, and since March 1996 has been presenting her own "Jazz Corner" every Monday.

And now her genuine feeling for jazz - her original first love, has been given the freedom and opportunity to flourish in the company of select musicians who also join her on this recording.

In some numbers, amongst them "A Time For Love", the sensitive flute of Staffan Hallgren, known from Pan Trio, can be heard in the form of solos and obligatos. More solo space is given to tenor saxophonist Anders Lindskog, whose CD "Cry Me A River" was issued by Touché Music in 1995. His rich flow of ideas and total concentration lends new dimensions to standards such as "More than You Know", "Everything Happens To Me" and "The Party's Over".

Pianist Carl-Fredrik Orrje, bass player Per-Ola Gadd and drummer Bengt Stark are all born in the 1960's. As a rhythm section they distinguish themselves as one of the most vital in Swedish jazz of the 90's. Carl-Fredrik and Per-Ola are heard as soloists in "That's All" while each make personal contributions to "I Fall In Love Too Easily" and "Everything Happens To Me", respectively. Each number receives the finishing touch by way of the subtle embellishment, which characterises Bengt's sensitive brushwork.

Agneta has a natural way of treating ballads and consequently this is primarily a ballad album. To give her best and most honest interpretations she has chosen only songs for which she feels a personal affinity both with their music and lyrics. She has a special relationship with each song and there is also some thought behind the order in which they are performed.

Agneta's voice has a greater depth of quality, another timbre than earlier, more experienced, mature and expressive, rich in nuances and emotional levels. Behind the unobtrusive, controlled approach one can sense strong undercurrents of passion and drama. Another distinguishing quality is her natural conception of timing, her personal way of using space between phrases thereby giving weight and meaning to the lyrics and rhythmic buoyancy to the notes.

Absent for far too long, we now at last have the pleasure of experiencing her singing anew. Why wait any longer even if Agneta assures us that "the best is yet to come"?

The repertoire consists mainly of songs from shows, musicals and films although some were written independently.

"A Time For Love" by Johnny Mandel with lyrics by Paul Francis Webster was written for the film "An American Dream" in 1966. In 1939 Hoagy Carmichael composed the melody to a poem by Jane Brown Thompson - "I Get Along Without You Very Well" - but it was not introduced until 1952 in the film "Las Vegas Story". Richard Rogers' "He Was Too Good To Me" with words by Lorenz Hart was featured in the show "Simple Simon" from 1930, while Jimmy van Heusen's "Here's That Rainy Day" with Johnny Burke's lyrics was written for the show "Carnival In Flanders" in 1953. "More Than You Know", the oldest song here, was written by Vincent Youmans in 1929 together with lyric writers Billy Rose and Edward Eliscu for the show "Great Day".

Three songs are of French origin. "If You Love Me" by Marguerite Monnot and Geoffrey Parsons from 1949 was originally "Hymne à L'Amour" when Edith Piaf introduced it. "The Good Life" by the French-born guitarist Sacha Distel with words by Jack Reardon was the leitmotif of the film "The Seven Capital Sins" from 1962. The waltz "When The World Was Young" from 1950 was composed by M. Philippe-Gerard with words by Angela Varnier, but it was Johnny Mercer who wrote the English lyrics.

Jules Styne's "I Fall In Love Too Easily" with lyrics by Sammy Cahn comes from the film "Anchors Away" 1945. "I'm Afraid The Masquerade Is Over" was written in 1939 by Allie Wrubel with words by Herb Magidson, while "The Party's Over" another of Styne's tunes received lyrics by Betty Comdon for the show "Bells Are Ringing" from 1956. Matt Dennis together with lyric-writer Tom Adair composed "Everything Happens To Me" in 1941. Another of Jimmy van Heusen's collaborations, this time with Sammy Cahn, produced "All My Tomorrows" for the film "Hole In The Head" in 1959. The two final selections are Cy Coleman's "The Best Is Yet To Come" from 1959 with words by Carolyn Leigh, and Bob Haymes' "That's All" from 1952 with lyrics by Alan Brandt.
Albrekt von Konow
Translation: Dave Castle

Cadence, January 1998:
"Agneta Baumann ....has a husky voice and slow phrasing not unlike Shirly Horn's way with a ballad. She also knows how to sing with drama, doing some of the most poignant songs in the American and French pop canons with clear, melancholy dignity. There are also a couple of slyly effective uptempo numbers like a finger-snapping 'The Party's Over' with a barrel-cheated tenor solo and Matt Dennis' sad sack classic 'Everything Happens To Me' which is done with understated humor. Saxophonist Anders Lindskog and pianist Carl Orrje set up Baumann superbly throughout, showing as much assurance as she does."

"This is a lovely recital."

"Fredrik Orrje plays sparkling and sympathetic piano and Staff Hallgren an appealing flute on 'A Time For Love' and 'He Was Too Good To Me'."

"Lindskog has an attractive, sometimes Lester-like tenor well displayed on 'Good Life' and 'The Party is over'...."

"Baumann moves into Ella mode on 'The Party is over', there's a touch of Billie on 'Every-thing Happens To Me' and of Cleo Laine in 'The Best Is Yet To Come'."

"Why did we have to wait so long to hear these different aspects of the lady's talent? The pianist stretches out boppilly on the last track too, as if let of the leash." 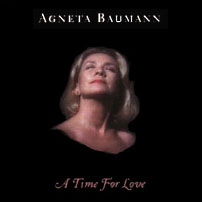