Jonas Knutsson Quartet pays tribute to the legendary keyboard virtuoso Joe Zawinul (1932–2007) with ten of his compositions. Nine are taken from the Weather Report era, the group he co-led with saxophonist Wayne Shorter for 15 years, during which time they defined the future of funk, fusion and jazz-rock for a whole generation.

Autumn had come to Stockholm. One afternoon in October I looked in at the office of Touché Music, and over a cup of coffee Laila Gavatin sent a thought across the table.

“Shall we record a tribute to Joe Zawinul with the quartet?”

I remember clearly that among the first three LP records that I bought as a youngster with my own money were two by Weather Report. “Sweetnighter” and “Tale Spinnin’” opened a door to a new musical vista for me. Out of the loudspeakers of my room in northern Sweden in the ‘70s flowed this mysterious, suggestive music…..magical and beautiful. I often lay on my bed and studied the colourful LP covers with photographs of the musicians. Who were they really? Where did they come from and why did the one with the moustache have a strange cap?

I put down my coffee cup and answered Laila after only a few seconds thought: “Yes, that really would be fun.”

All of us in the band have been inspired by Joe Zawinul’s music over the years. For example, a fantastic concert by Weather Report with the divinely gifted percussionists Alex Acuna and Manola Badrena inspired and changed Rafael Sida’s way of playing percussion for ever. A concert by the Zawinul Syndicate always contained music of a high level with singing and entertainment. You could find elements that united music from the whole world. It was as though he wanted to tell us that perhaps there isn’t any really “pure” music at all in the world. Everything comes out of something. Everything is dependant on something

That way of thinking is something that we have also tried to apply in the Jonas Knutsson Quartet when we make our own music, even if the emphasis lies mostly in Scandinavian music and jazz.

The first band I played with had influences of Weather Report amongst others. The way of sorting out what you like and leaving what you don’t like from the enormous ocean of music and seeing if new music can come out of it. I still try to adapt this attitude towards music. We are very happy to have this opportunity to pay tribute to Joe Zawinul in our own way and would like to thank Laila for this initiative. It has been a great pleasure for Anders Persson and myself to botanise in the master’s considerable record production and to try and choose and arrange some gold nuggets for this recording.

In our interpretation of “Birdland” we would also like to honour Charlie “Bird” Parker, whose music has an eternal radiance.

Man In The Green Shirt. I learned to play the soprano sax to this.

Black Market. A real feel-good tune. The steelpan-like instrument that Rafael plays on here is called “Hang”. In the bridge passage I always think about the Greek composer Mikis Teodorakis’ composition “O Kaimos”. Perhaps it was an inspiration, who knows…

Special thanks to: Joe Zawinul for the music and inspiration, Laila and Charles Gavatin, Åke Linton, Göran Stegborn and Kristin Lorentzson.

It would be hard to find another musician from any part of the world who lived a richer musical life than Joe Zawinul. Born in Vienna in 1932 he attended the Vienna Conservatory and by the time he was 20 was playing jazz with Hans Koller and doing studio work for Polydor Records. But Austria was not the ideal place to make his reputation as a jazz musician and in 1959 he won a scholarship to the Berklee School of Music in Boston and took the opportunity to emigrate to the United States. He was soon playing piano with the Maynard Ferguson big band and toured for four months. On tenor in the orchestra was a young Wayne Shorter. At this point in time their paths diverged and while Zawinul moved on to become Dinah Washington’s accompanist, Shorter joined Art Blakey’s Jazz Messengers. But in 1961 Zawinul landed the prestigious job as pianist with the Cannonball Adderley Quintet, where he was to stay until 1970. During this time he contributed chart successes for the group, such as “Mercy, Mercy, Mercy” and later “Walk Tall” and “Country Preacher”. He also introduced the Fender Rhodes and Wurlitzer electric pianos into the ensemble sound. Towards the end of the ‘60s Zawinul began working with Miles Davis and was involved with the studio albums “In A Silent Way” (the theme of which he also composed), “Bitches Brew” and “Big Fun”. Zawinul was now adding a new range of instruments to his keyboards and his command of the ARP, Oberheim and Prophet synthesizers was to have a determining influence on the whole development of the jazz-rock fusion era throughout the ‘70s. It was again in 1970 that the paths of Wayne Shorter and Joe Zawinul once more crossed when they formed “Weather Report”, a group they were to lead together for the next 15 years. Many of the most extraordinarily talented musicians passed through the band including bassists Miroslav Vitous, Alphonso Johnson, Jaco Pastorius and Victor Bailey, drummers Alex Acuna, Peter Erskine and Omar Hakim and percussionists Manolo Badrena, Dom Um Romao and Mino Cinelu, to mention only a few. The band’s first album, named simply “Weather Report” became Down Beat magazine’s Album of the Year 1971 and is still considered a classic of early fusion. For the next fifteen consecutive years, Zawinul and Shorter co-led the group creating a new album each year and defining the progression of funk, fusion and jazz-rock for a whole universe of bands. Zawinul often employed a vocoder as well as pre-recorded sounds played through a synthesizer and provided an energetic powerful drive to the band. Down Beat magazine awarded 5-star ratings to many of the first albums of the ‘70s.

After 1985 both Zawinul and Shorter disbanded and went on to lead their own groups, both influenced by their earlier work with Weather Report but also including many new aspects of music.

Of the 10 musical items on this CD, the Jonas Knutsson Quartet have chosen Zawinul compositions, all but two of them taken from the Weather Report era.

“Black Market” comes from the album of the same name from 1976, the first one to feature Jaco Pastorius.

“Birdland”, one of Zawinul’s most durable compositions, was on the “Heavy Weather” album from 1977.

“Many Churches” is from an album by the Zawinul Syndicate called “My People” from 2006.

“Young And Fine” comes from the controversial album “Mr Gone” from 1978, (it was the first album by the Weather Report to have the odd distinction of receiving a less-than-good review in Down Beat magazine, one that was strongly contested).

“Midnight Mood” is from an album titled “Money In The Pocket” by the Cannonball Adderley Quintet, recorded “live” in 1966 but issued for the first time by Capitol in 2005.

From the late ‘80s up until his death on September 11, 2007, Joe Zawinul led his band the Zawinul Syndicate. The group typified his open attitude of fusion and world music, making inroads into music of other cultures and colouring it with Zawinul’s own dynamic personality from his massive array of keyboards. Like with Weather Report some of the finest musicians in the field of fusion passed through the band. During his lifetime Joe Zawinul composed some of the most compelling music to be heard anywhere in the world and in addition was voted “Best Keyboardist” in the critics’ poll of Down Beat Magazine no less than 30 times! 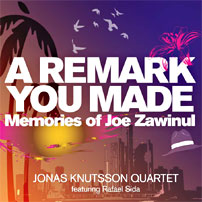 All music composed by Joe Zawinul