Staffan Hallgren played jazz on the flute since the middle of the ’50s and performed with such musicians as Eje Thulin, Bernt Rosengren and Christer Boustedt. He later chose a career as an officer in the Swedish navy, although this did not mean having to give up his flute playing. Eventually he left his position as a naval commander to concentrate all his time on playing jazz. Stefan died in 2015.

Many musicians, in most saxophone players, treat the flute as a secondary instrument. This is, however, not the case with Staffan Hallgren who has chosen the flute as his main instrument, a fact which made him one of the most outstanding exponents of jazz flute in Sweden. His playing contained a combination of warmth, intensity and energy. He played willingly in diverse group combinations, but primarily led his own group “Pan Trio”. The trio, which consisted of flute, acoustic guitar and double-bass, was a jazz chamber group with a repertoire covering a wide spectrum of music. 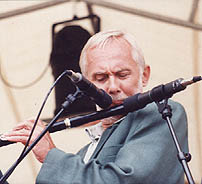 Featured on
TMcCD 006 A Time For Love