Bass player Mads Vinding is most well known for his involvement in jazz but his musical palette stretches over a very wide range. For example, he plays together with singer Eva Madsen, and in the duo “Back to Bach” he joins with Poul Rosenbaum in exploring the musical treasure chest of Johan Sebastian Bach. Mads has also recorded a CD with folk music, and in addition to improvised jazz he enjoys playing classical music. “In classical music you always play the same notes but you work with one note at a time, trying to find out where the emphasis should lie and how to refine each note. It’s the very small details that count. You gain another viewpoint and also it is something quite different to play music which you haven’t created yourself”.

The Mads Vinding Trio was formed in 1997 after a project with the Italian pianist Enrico Pieranunzi and drummer Alex Riel. The project resulted in the CD “The Kingdom”, which in 1998 was voted Jazz CD of the Year.

Mads can be heard to full advantage in duo and trio formations where he has developed the ability to bring the bass into focus without feeling the necessity to play a multitude of notes. On the contrary, he confesses to practising the art of restraint – “to make a little go a long way” – and, not least, the art of playing softly. “These days people play very loud. They destroy the ears of the audience. At a place like the Copenhagen JazzHouse it’s quite possible to play acoustic bass, and the audience can hear everything once they have become accustomed to that level. With this insight, Mads Vinding today plays mainly acoustically – that is to say with the very minimum of electrical amplification – on most of his engagements. He admits, however, that he too has been guilty of playing too loudly. “When I was with the Danish Radio Big Band in the old days, I was the one who played loudest of all!”

After 35 years as a musician who has always been much in demand, Mads’ enthusiasm for playing is still as great as ever. It feels almost as though he has been on the Danish jazz scene since time immemorial. At the end of the ’60s he was the house bassist at the legendary jazz club Montmartre in Copenhagen where he played with many of the visitors as well as the Americans who were residing at that time in the capital, such as Ben Webster, Kenny Drew and Stan Getz. Mads has taken part in around 600 recording sessions and has played all over the world with numerous Danish and internationally renowned musicians such as Herbie Hancock, Wayne Shorter and Svend Asmussen.

Based on an interview with Mads Vinding in Politiken, Kultur och Debatt, side 1, on 3 May 2000. (When the whole is greater than the sum of the parts) 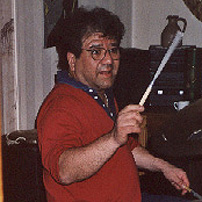