Leroy was born on his parents’ farm in Pittsburgh, Pennsylvania, on 4th of July 1944. In the late ’50s when in his teens, his parents moved to Washington D.C. and there he started playing in local groups. “Every Sunday we sang gospel at church but on Saturdays we listened to the radio, mostly rhythm & blues with Big Joe Turner, Charles Brown or Fats Domino”. No member of the family played an instrument but in Washington Leroy started playing in the school marching-band. In fact he wanted to play the oboe or the bassoon but they needed a drummer, and so it was.

In the beginning he didn’t know anything about jazz. In Pittsburgh he had listened to Charlie Parker ‘live’ and noticed that everyone talked about him as a very special musician. Leroy didn’t understand what Parker was doing; he just wondered why he played twice as fast as all the others. When a cousin of Leroy, who played the drums, moved to Washington it all became clearer to Leroy. “He made me listen to albums with Les McCann and Max Roach and he also explained what was happening”. His cousin personally knew practically all the drummers of importance. Every time they played in Washington they were invited to the Lowe family, an impressive guest list with such illustrious names as Art Blakey, Kenny Clarke, Roy Haynes, Philly Joe Jones, Elvin Jones, Buddy Rich and Max Roach. “It was quite marvelous to meet all these personalities, to sit together with them on the sofa and understand that they were here in our house! Blakey used to go directly to the drums and beat out a marvelous ‘press roll’ almost making the whole house fall apart, and Buddy Rich used to go down to the cellar to practice for hours. When he showed me how he did things, he always told me that it was just to practice over and over again.”

Leroy’s cousin noticed that Leroy wanted to develop his understanding of music and told him to find out what had happened in the years before. So Leroy listened a lot to Zutty Singleton, Baby Dodds, Chick Webb, Big Sid Catlett and Dave Tough: “These guys really knew how to play. Sometimes I couldn’t understand that they were that progressive so long time ago.

When Leroy was 18 he quit the marching-band and began to take private lessons and simultaneously he practiced together with his colleagues Billy Hart, Joe Chambers and some others. At that time there was a jazz club in Washington named Bohemian Caverns and as soon as Miles Davis’ or John Coltrane’s groups played there, Leroy and his friends were present. If Leroy should have been asked to name just one favourite drummer, he’d have said Tony Williams. To Leroy he was a genius, “absolutely complete, and he outshines all the others when it comes to technique, swing and fantasy or whatever you would call it.”

In 1964-65 Leroy studied drums, piano, harmony and arranging at Berklee School of Music in Boston. When back in Washington he joined a local group for some time and he then toured almost one year with Otis Redding’s Big Band. When he quit the band, he’d played 42 one-nighters in a row and slept in the touring bus on all nights except for three. So he felt that he was no longer able to live in that way. He realized that he had to calm down a bit and take a holiday. So he whirled a globe, closed his eyes and let it spin to see where in the world his finger pointed when it stopped. His finger indicated somewhere between Sweden and Norway. So he went to Oslo, Norway and there he met some Danes who tempted him to go to Copenhagen. Then some Finns tempted him to go to Helsinki, where some Swedes suggested he should go to Stockholm. He loved Stockholm so much that he settled there even though he periodically worked in Amsterdam and other cities. He frequently played in Europe with American and European soloists among others Johnny Griffin, Ben Webster, Dexter Gordon, Toots Thielemans and guitarist Philip Catherine.

For more than over 30 years he was one of the most successful drummers in Sweden and he was a member of several steady groups such as ‘Rena Rama’ (1975-83), Tommy Koverhult’s Quintet (1980-85), ‘Equinox’ (1983-89) – a group which played also in Canada – and ‘Opposite Corner’ (since 1982) where he played with, among others pianist, Åke Johansson and double-bass player Kjell Jansson.

Sadly Leroy, a warm human being and a great musician, is no longer with us. He died of cancer in Stockholm on 13th of December 1999.
(Based on an article by Albrekt von Konow in OrkesterJournalen, Sweden, 2/1994) 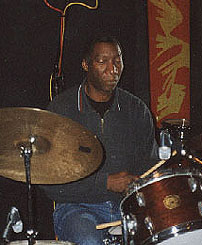 Featured on
TMcCD 009 Back From Where We Came