Knud Jørgensen was born in Copenhagen in 1928 and died in 1992 in Stockholm. He decided to stay in Sweden while on tour with a Danish band in the mid-fifties, and remained for the rest of his life. For many years he was one of the most personal, versatile and talented jazz pianists in Sweden, both as a rhythmic prompter and as an explorer of the secrets and possibilities of the chords. He had a special feeling for Duke Ellington, as well as a special sensitivity and ability to capture the essence of Ellington harmonies, sound and rhythmic accent.

Knud played with a remarkable skill in holding the threads of the music together with his piano. If anything could be added to a part he just put it in, unerringly, at the right moment and with the right phrase, sound and beat. This was true whether he accompanied guest soloists such as Toots Thielemans, Ben Webster, Harry “Sweets” Edison and others, or recorded with Svend Asmussen, Arne Domnérus, Bosse Broberg, Nisse Sandström and Lars Erstrand. More often, however, one could hear him with his own small groups and from the late seventies usually in a duo with his musical spiritual brother, the bass player Bengt Hanson.

In 1990 Knud Jørgensen was the first musician to receive a scholarship from Laila and Charles Gavatin’s Foundation for Jazz Music. As a matter of fact, he was the very person who inspired the founders to establish the foundation, as they consid-ered him to be a brilliant musician, unjustly underrated and therefore deserving more attention and encouragement.

Why stick to the duo format? “We became a unity and got to know each other so well that a look or expression from either of us in the course of playing would be enough to have us agree on the development of a certain passage,” says Bengt Hanson. “We never felt the need for a third player. It would also have been hard for such a player to join this entity, and it wouldn’t, to our way of thinking, have added anything to the music. But occasionally some sensitive wind or brass player such as Gustavo Bergalli would perform as a guest.” 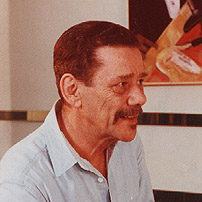