Johan Löfcrantz, born in 1969, has grown up in a music-loving environment where all the family members used to play or sing together. When he was four years old he started playing the cello but aged about five he built a drum-set of saucepans and he soon started taking private lessons in playing the drums. His most important sources of inspiration at that time were Aretha Franklin, Earth, Wind & Fire and ABBA. When he was 15 he started a group of his own.

When entering the upper secondary school Johan got the chance to study music and it was during that time that he came into serious contact with jazz music. As early as 1988 he was awarded a scholarship from the late pianist Thore Swanerud’s Foundation. From 1988-1993 he continued his studies at the Royal College of Music, his teacher being the excellent drummer Pétur ‘Island’ Östlund. During that period he also started freelancing and in that way he came into contact with many artists, several of them being internationally renowned.

“When I was younger I used to listen very much to Tony Williams and Art Blakey but also to ‘beat’ and fusion music. I’ve always loved almost every kind of music so I find it difficult to direct myself towards one genre only. Periodically I listen to and practice sometimes jazz and at other times beat music” says Johan.

Johan has performed with most of the great Swedish musicians and artists such as Arne Domnérus, Putte Wickman, Monica Zetterlund, Niklas Strömstedt, Richard Wolff, Svante Thuresson and Viktoria Tolstoy. He has also appeared with the Swedish Radio Jazz Group and the Stockholm Jazz Orchestra. He has been working with international musicians and artists too, such as Toots Thielemans, Clark Terry, Stevie Wonder, Maria Schneider, Dick Oatts, Kenny Werner and the N.D.R. Big Band. It should be added that he nowadays teaches at the Royal College of Music.

“If I should be asked which record I’d like to bring to a desert island I’d say Miles Davis’ Milestones with “Philly” at the drums”. 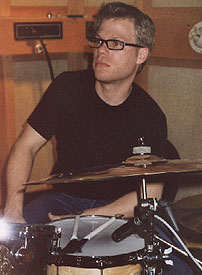