Joakim Milder, born in 1965 in Stockholm, grew up in a home enamoured by music, his father being one of the best swing pianists in Stockholm, his mother being a singer and teacher of music as well, a musically talented older brother, an older sister who is also a music teacher and a twin brother who was at that time studying at the Opera college. From his father the accent and repertoire of jazz music was there since his childhood. However, Joakim had shown very little interest until he ‘was struck’ to quote his own words. Before that he had played the recorder for many years, devoting himself to baroque music. He wanted to develop and improvise but choosing the saxophone was merely by chance; in some ways it resembled a recorder. And as always when something had ‘struck’ him it was on the border of mania. In about 1980 – just before he started studying at an upper musical high school – he decided to become a jazz musician. He never hesitated to consider the consequences; being a musician implied that he sometimes had to do things that are not so very committing as for example to travel a lot, work hours when others are free, periodically seek unemployment benefits.

Then everything happened rapidly. A few years later he achieved his big ‘break-through’. By that time he had developed his own, most personal way of playing the saxophone. He believes that there are advantages in having achieved some kind of aesthetic decisions before starting the long road of practice on one’s instrument and to have a fair idea about what appeals to you and as how you wish to present yourself musically. Says Joakim: “Music must be created by a desire to communicate something, otherwise it is of little interest to me – it’s simply a waste of time listening to someone who has nothing to say. I’m not alleging that it was clear to me earlier on how I related to music but that was during a period of life when one starts reflecting and trying to look beyond oneself. Musical development deals very much with peeling away the superficialities and cultivating your playing.”

Joakim’s own tonal language, the distinctive character of his music, was present even from the start. It came naturally to him. He can’t see any value in standing out in a crowd, not as an end in itself. During the last 30 years it is above all John Coltrane’s music that has been reflected in the succeeding generations of saxophone-players. But Joakim is one exception. He understands, of course, all those who have been willingly influenced by Coltrane. But when listening very carefully to Coltrane’s music Joakim can hear something else, namely, the importance of making your own voice distinctive and to play the music in which you believe, even though those who surround you may have a completely different opinion.

Joakim has taken pains to function in as many musical connections as possible but he has never thought of using anything that other musicians have formulated. Even though he knows the tones and phrases of others he believes that he could never make living music of them.

Joakim says that his music gradually is becoming more and more accessible and that he has a greater understanding for those who find his music sometimes commonplace or harmless than those who find it difficult to listen to. When the inner voice is saying something strong and clear it defeats all intellectual barriers. That’s why it’s a very strange but nevertheless common remark that one doesn’t understand music. As if anyone ever understood! Joakim says that personally he doesn’t understand anything of what he plays.

(Based on an article by Lars Westin in OrkesterJournalen 4/1997)
Compilation: Charles Gavatin
Translation: Dave Castle 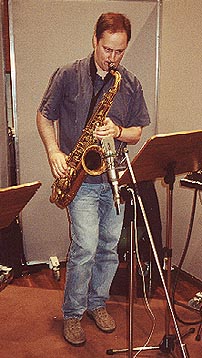