Gösta Rundqvist was born in 1945 and died in 2010. He grew up in Iggesund, a small town in northern Sweden. Music entered his life early, and at the age of 14 he started playing in a local amateur band with some other youngsters. His contact with ‘real’ musicians was in a band that played for dancing. The accordion player had a nice way with chords, and to get a chance to pick some knowledge Gösta became a vibraphonist and joined the band. In the final hours of a long, gruelling jam session, the kind only very young musicians find pleasure in, the metal of the vibraphone gave him a case of blood poisoning. What price beauty….

In the ’60s jazz music disappeared from those latitudes and Gösta moved to Hudiksvall (a somewhat larger Swedish town), got a job in an office, and really started concentrating on the piano. He played in a couple of regional big bands. In them he met a lot of horn players, and together with some of them Gösta started a jazz-rock band called “Splash”. Gösta played the organ, and Blood Sweat and Tears as well as Chicago were the models of the band. Playing in the band enabled Gösta to develop his music into hitherto unexplored areas. After that period he and his friend, saxophonist Håkan Lewin, formed a quartet named “Excursions”, playing more open, modern jazz and in 1976 both of them joined the internationally known Sandvik Big Band. This period was a milestone in his life: “I stopped smoking and then one’s life has to be in order.”

In 1979 he moved to Sandviken, and, leaving his office job, started working as a music teacher with which he was busy for ten years. Simultaneously he continued his collaboration with Håkan Lewin as well as with tenor saxophonist “Jonken” Jonsson and singer Lena Jansson in a more intimate quartet format. The time he spent with Sandvik Big Band up to 1989 was a good time in many ways – he met a lot of people who were guest soloists with the band, and he consequently worked with many of them in smaller contexts. One of them who was important to him was double-bass player Red Mitchell. Red helped him to listen to his own musical language, his inner voice, and strengthened his belief that that was just what he should be trying to communicate. Another of them was the late Swedish clarinettist Gunnar “Siljabloo” Nilsson, who impressed him deeply with his total identification with what he was playing at any given moment. When he was playing he was the music. Gösta started giving a lot of thought to the effect one’s state of mind has on the music that comes out.

Under the effect of these and other similar ideas, Gösta in 1989 practically started playing all over again. “Now I play what I hear. It’s a question of sowing seeds into the listeners. The difference is that, when playing, you use a ‘universal language’, you speak even though there are no words, there is a message that immediately communicates and is so generous that the person who receives it into his heart can it use it exactly as he wants to at that very moment. That’s the great thing and that is the power of music. One receiver can take joy in the music another can be consoled. The receiver is as important as the sender. If one enters the music as ‘naked’ as possible, free of preconceptions and personal intentions, and can really be there when the music is happening, then the listener (if he/she is really there) is able to get what he/she needs from the music. Music is a very generous medium, that permits the listener to experience his/hers emotional world as well as the emotional world of the musician.”

Gösta Rundqvist appeared on about twenty albums and he also composed several tunes. For many years he was a member of Nogenja Jazz Soloists Ensemble (Nogenja stands for Non Generation Jazz – a protest against the jazz world’s increasing obsession with age). But he was mostly heard in his own and in other’s smaller groups where improvisation has more freedom of movement as for example with clarinet player Putte Wickman and singer Svante Thuresson and he often played together with late Red Mitchell as well. Toots Thielemans who appears on one of Gösta’s albums is not the only international guest artist who shows appreciation for Gösta’s playing and that took advantage of his talents when they were needed. Others include such musicians as Clark Terry, Johnny Griffin and Ken Peplowski.

(Partially based on an article in by Torsten Eckerman in [jazz stage] Sweden 1/98.)
Compilation: Charles Gavatin
Translation: Dave Castle 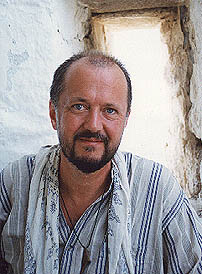