Gilbert Matthews was born in 1943 in Capetown, South Africa. He began his career at the age of 15 as a guitarist playing in a quartet at “Tiffany’s”, a smart jazz club in Capetown. One night the owners announced that in future the group would become a trio and he was to be the drummer! Over the next half year he taught himself to play by long hours of daily practise.

He continued to play drums in other groups but the political situation in the country forced him to flee to London in 1968. From there he continued to New York and Los Angeles where he took lessons from amongst others Max Roach and Elvin Jones. Gilbert secured a job playing for the great Ray Charles at the beginning of the Seventies and stayed for 18 months. After that he became Sarah Vaughan’s drummer which he describes as a wonderful experience.

Gilbert first visited Sweden in 1973 but continued to work occasionally in USA sometimes with vibraphonist Terry Gibbs until finally in 1979 he married and settled here. In 1981 he became the regular drummer with Christer Boustedt’s group which included trumpeter Bosse Broberg and with which he recorded two renowned LP albums. He also played and recorded with Johnny Dyani and Brus Trio. Another famous musician with whom Gilbert has worked, and still does today, is tenorist Archie Shepp in whose group pianist Horace Parlan also plays.

After Christer Boustedt’s tragic death Gilbert continued with that group which from then on took the name of Contemporary Bebop Quintet (CBQ) with Stefan Isaksson as the saxophonist and in 1991 after many years of exile he was able to once again play in South Africa when CBQ toured there in collaboration with SIDA, the Swedish organisation for foreign aid and development.

Gilbert Matthews is an all-round, flexible drummer who enjoys playing in every idiom from traditional and swing to bebop and free-form. He has listened to all the great drummers from Baby Dodds, Sid Catlett and Jo Jones to Blakey, Roach, Elvin Jones and the modern-day masters. His particular favourite is Ed Blackwell. Today Gilbert can be heard in many different musical situations including his own group and continues to grow and develop, always listening and always ready to learn. 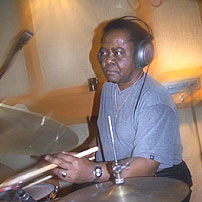