Esbjörn was born in 1964 and died in 2008 in a tragic accident. When he was young jazz was not an obvious part of the times for him. But rapprochement knows no boundaries. Rock, pop, jazz and funk fuse together, giving a form of expression in which the differences are outweighed by the similarities. He was an unusual pianist, with his playfulness and unpredictability, but he was an even more unusual accompanist.

There are many explanations to the fact that the piano became his instrument. One of them is that his mother played very much and very skillfully when he was young; he used to lie under the piano listening to music by Chopin and other composers of the 19th century. His interest in jazz was awakened in the upper secondary school. There were many gramophone records in the home of his childhood, His father had records by Duke Ellington, Benny Goodman and Charlie Parker and his uncle, Gunnar Svensson, was one of Sweden’s finest pianists for half a century. When Esbjörn got a tape with the boogie-woogie pianist Albert Ammons on one side and pianist Bengt Hallberg on the other, he just “froze” over what he heard, but said Esbjörn “I didn’t know how to make it out for my own part. But there was a secret that I wished to conquer, I heard the sensitivity in the chords and the sound of the music.”

In the beginning there were no teachers who shared his increasing interest in jazz. It was later in the upper secondary school in Västerås that Esbjörn had a Polish teacher who made him write compositions and play in a varied way in different styles and tempi. “For the first time I had to work with music and simply had duties. That was stimulating. Being a self-taught pianist I haven’t had any traditional teachers. But ever since the time lying under my mother’s piano I have been curious of the instrument and its possibilities to create sounds.”

A recording that inspired and encoutaged Esbjörn to improvise was Keith Jarret’s first solo-LP for ECM, “Facing you”. Another that he heard much later and to which he had a lasting love is “Now he sings now he sobs” with Chick Korea, Miroslav Vitous and Roy Haynes.

Once having established himself on the Swedish Jazz scene, Esbjörn left it to work with a handful of artists belonging to the Swedish pop elite. “But after a few years I understood that improvised music is where I belong”. But the knowledge he gained from working in the pop field is still with him.

In 1995 Esbjörn was voted “Swedish Jazz Artist of the Year”. 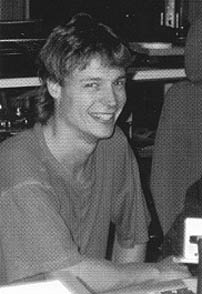