“My playing has become more simple and more precise, I’ve come closer to what I want to say and more straightforward” says Bobo Stenson (born in1944). At the same time as this shift in his expression has taken place, the career of pianist Bobo Stenson has accelerated. Since 1988 he has been part of the Charles Lloyd and Thomas Stanko Quartets, while promoting a long list of his own projects where his own trio has been, and is, the most important ingredient.

But this increased concentration in his playing, does not mean that he has placed his lyrical core in hock, only that he reaches it more quickly. Once there, he is absorbed by a tonal flow as ever before, grasping the tones one by one, juggling them until they form a shimmering bouquet. No wonder he has attracted so wide a range of musical temperaments as Stan Getz, Don Cherry and Jan Garbarek. Today he divides his time between a numbers of different groups. “You don’t get into a rut as easily that way and you develop yourself in fresh company. But mostly because it’s a lot of fun to play with different musicians.”

Bobo Stenson has effectively defined the meaning of modern piano in Sweden since the late 60’s. Early in his playing career he has accompanied a long line of visiting American players including Sonny Rollins, Stan Getz and Gary Burton, worked closely with Don Cherry from the beginning of the trumpeter’s residency in Scandinavia, and George Russell, as well as playing with local giants such as the still-too-little-known tenor saxophone player Bernt Rosengren. In May 1971 his trio album Underwear was recorded and that album was certainly one of the first European trio albums that could be considered as a response to American developments in post-Bill Evans piano. Bobo Stenson had obviously monitored the mixture of lyricism and abstraction that fuelled the early trios of Chick Corea and Keith Jarrett but was able to assimilate this influence in a style which even then was clearly his own, and his interaction with Norwegian drummer Jon Christensen was already remarkable.

The late 70’s and early 80’s found Bobo concentrating primarily on the development of his Swedish projects, particularly the cooperative band Rena Rama together with, among others, double-bass player Palle Danielsson. In 1988, Bobo Stenson joined the re-vamped Charles Lloyd Quartet and since 1996 he has been appearing at major jazz festivals with Tomasz Stanko’s Septet/Sextet, featuring arrangements of Krzysztof Komeda’s compositions for film and for jazz ensemble.

Bobo Stenson (born in 1944) started playing the piano when he was five years old. At that time it was only a question of classical music, but at the age of twelve he played his first blues and since then he has played quite a number of them. His six-year-older brother played the drums and also had some gramophone records. So Bobo used to play his brother’s drums while listening to Kenny Clarke and the other pioneers. That was his school.

In his early teens Bobo came in contact with other like-minded enthusiasts in his hometown and he played a lot together with bassist Ivar Lindell and trumpeter Lars Färnlöf. They used to look around for places to jam and transported a piano on a bicycle barrow, sometimes having to haul it up several flights of stairs just to get the chance of playing. At the same time Bobo continued playing classical piano, taking lessons from a teacher for about fifteen years. Although Bobo enjoyed those lessons he was really more interested in jazz music, so the quality of his classical playing was uneven at times. His teacher, however, was very sympathetic as he himself had played jazz in his youth and he understood what Bobo was doing. – Bobo still plays classical music today and Bach is a constant challenge. It keeps his technique in shape.

Bobo never experienced any identity crises as many did around 1960 when jazz disappeared from the open-air dance-floors and the popular music forums. “Jazz was a kind of artistic music to us and we took it in all seriousness. One of the great, decisive experiences to me occurred when Coltrane’s ‘Ballads’ was issued. We listened to it at bassist Ivar Lindell’s place and I was deeply affected. In fact I still tremble with emotion when listening to it.”

In 1963 one could read in the Swedish jazz magazine OrkesterJournalen about some surprisingly good local musicians from the town of Västerås. Bobo was one of them, and he was asked by tenorist Börje Fredriksson to join his band. Bobo accepted and that meant that he frequently was in Stockholm to play. In the daytime he studied at school and after lessons he travelled south to Stockholm, played and then travelled back home again after the gig. His ma was nice to him, he was even allowed to borrow the family car; but Bobo doesn’t think that his dad really understood what was going on.

When having qualified for entrance to a university he went to Paris with a quartet and also to learn French and copy drawings at ASEA’s office outside Paris. But within two days the quartet got a gig at a club in Montparnasse. He would leave the club around five o’clock every morning, get an hour’s sleep then get up again at seven o’clock and take the train to his work – and fall asleep. Finally he called the boss and said that he had to take leave to go to a jazz festival. He never came back because he played every single day for six months together with vibraphone player Gunter Hampel at Blue Note and with the American saxophonist Andrew White III at Chat-qui-pêche. Finally he went on tour with the Germans and the female singer Inge Brandenburg and they made a recording in Berlin in1965. It was Bobo’s first record.

Military service was an ordeal for him, as he wasn’t able to practice and was considered an idiot when he asked for earplugs when cannons were being fired. He warned bassist Palle Danielsson who was soon to do his military service later. Palle purposely marched out of time when they were supposed to march in column – five against four. Naturally he was exempted from military service.

After his military service Bobo studied music science for a time but soon playing once more prevailed. He never planned to become a musician. It just happened that way. Drummer Rune Carlsson formed a trio together with Bobo and Palle. They went to Germany and played in clubs every day with Dexter Gordon and Benny Bailey but there was no money in it. Consequently they had to pawn their cameras and other belongings to come home again. Soon the gigs became more frequent and varied. He played in the group Opposite Corner, as well as a theatre review and a tour with a well-known Swedish entertainer. When bassist Red Mitchell moved to Sweden in the late 60’s he formed a trio with Bobo and Rune Carlsson and toured Europe.

And now the foundations were being laid for some other co-operations of long duration – the ‘Norwegian’ group (with Jon Christensen and Arild Andersen) and Rena Rama, the group that would exist for more than two decades.

The 70’s was an extremely intensive period for Bobo, playing in innumerable constellations and finally he even had to decline offers to play. At that time he had a quartet with among others Jan Garbarek, who together with the other members suddenly also started playing with Keith Jarrett. This resulted in Bobo’s group having some of Jarrett’s tunes in the repertoire, for which Bobo was a little uncomfortable due to the obvious comparison with Jarrett. But Bobo has never chosen to copy anyone, Jarrett, McCoy Tyner or Bill Evans. Nevertheless Bobo admires Jarrett’s music and when Jarrett performed in Stockholm in the 60′ they became close friends.

Bobo seems to be able to play as much as he wishes and even more than that. That makes it necessary to be selective. He constantly needs new musicians to play with, new situations and audiences to support his musical appetite. The most important thing to him is “feeling”, and that often arises by the communication between the musicians. “How you play is important. Improvising means to make a composition out of the ideas and situations that suddenly occur and really try to invent something, to create energy, to make it give off sparks….” 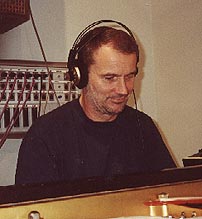