Pianist Anders Persson, born in 1958 in Gothenburg, Sweden, has for many years been one of the most versatile and highly respected pianists on the Swedish jazz scene. Since the early Eighties he has been working as a performing artist and composer, playing and recording with a large number of well-known Swedish groups such as, for example, Anders Bergcrantz Quintet, Christian Spering Quintet, Gustavo Bergalli Quintet as well as such international names as Tom Harrell, Clark Terry, Luis Salinas and Toots Thielemans, just to mention a few. Since 1988 he has been leading his own trio with Yasuhito Mori (b) and Magnus Gran (dr). In its itinerary this trio has toured Japan twice.

In November 2002 Anders Persson received a scholarship from Laila and Charles Gavatin’s Foundation for Jazz music. 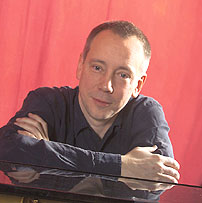 Featured on
TMcCD 018 Jonas Knutsson Quartet
TMcCD 022 Lonely Fungus
TMcCD 023 Who Are You?
TMcCD 028 A Remark You Made – Memories Of Joe Zawinul