Åke Johansson (1937-2011) was one of Sweden's most influential musicians in the bebop tradition. In 1944 he came to a school for the blind in Stockholm. There he was educated in music and later on took his examination as a piano-tuner. He intended to be an organ player, but in autumn 1949 Louis Armstrong's dream sextet came to Stockholm with Earl Hines at the piano and the pupils had been invited to attend. Then there was no turning back. He started listening to jazz music. In 1954 he heard Billie Holiday at the Stockholm Concert Hall and at that time he also started buying records. One of the most important was Miles Davis' Walkin' with Lucky Thompson.

In the beginning Åke was influenced by Charlie Parker and Bud Powell but later on he turned his interest to Lennie Tristano and Lee Konitz. Although he still appreciates them, Parker, Powell, Dizzy, Kenny Dorham and Miles Davies are the greatest to him, harmonically more interesting and obviously more swinging. But of course he likes Thelonious Monk. Later on he also took an interest in Bill Evans, McCoy Tyner, Herbie Hancock and Kirk Lightsey and he likes Cecil Taylor's fantastic energy.

When Åke started playing he had no bass player to accompany him. "So I had to accompany myself. That worked because I have always liked Earl Hines, Teddy Wilson and Billy Kyle, so I knew that style". Pretty soon Åke came out in the Stockholm jazz life and started playing mostly at jam sessions. In the '50s he joined a Dixieland band for some time playing at Nalen (the most famous jazz venue in Sweden at that time) and in the amusements parks. Now and then he also toured with other bands.

In 1956 he passed his final examination as a piano-tuner. Being pretty tired of Stockholm, he decided to move back to his native town Borås where he got a job as a piano-tuner. "When I came to Borås I had jobs with local dance-bands playing in restaurants, maybe not so very much jazz. I gladly play for dance and I'd love to play with a good trio at a restaurant, many nights a week at the same place in order to learn to know one another."

Accompanying soloists has often intruded on the pure trio gigs. It started in 1963 in a jazz club in Gothenburg where three soloists followed each other - the tenor saxophonist Archie Shepp, the Swedish alto saxophonist Rolf Billberg and the alto saxophonist and flute-player Leo Wright. In 1964 he accompanied Dexter Gordon for the first time and after that they worked together not only whenever Gordon came to Gothenburg, but also on a couple of tours. In the '70s Åke toured with the Swedish baritone-saxophonist Lars Gullin and the Gothenburg chamber choir. In 1970 Åke Johansson's trio had the opportunity to play with Lucky Thomson for three nights in a jazz club in Gothenburg. Lucky Thomson liked him, as he knew all the tunes.

Åke Johansson Trio toured all over Sweden with Chet Baker and James Moody. Otherwise - for example with Toots Thielemans, Art Farmer, Doc Cheatham, Rolf Ericson and Cecil Payne - it has been a general rule that Åke Johansson Trio has played the gigs south of Stockholm and all other engagements have been distributed to musicians in Stockholm.

Åke remembered with special delight his collaboration of many years with Dexter Gordon. "The most fantastic thing about Dexter was his intensity and his way of playing the tunes. There were at least fifty jobs. And Chet Baker - that was simply magic! The first time we had eight jobs and made a live recording in Gothenburg. A year later we toured for a long period, having 27 engagements."

Åke worked with several other groups, notably 'Opposite Corner'. From the 80s he played in trumpeter Maffy Falay's sextet. That group appeared at festivals in Turkey and other countries. He has also played with CBQ, the 'Contem-porary Bebop Quintet' with trumpeter Bosse Broberg and tenor saxophonist Stefan Isaksson. The group toured many times in Greece and also performed in South Africa and Israel. During the 90s the trio toured Greece, Russia and Lithuania.

In 1977 double bass player Kjell Jansson became a member of Åke Johansson Trio and in 1995 drummer Magnus Grahn joined. Their repertoire consists mostly of Åke's own melodies, which have also been published in a sizeable volume.

In 1974 Åke made his first LP album "Monday Date" with his trio. That recording has been followed by several more over the years, including "Encore" - voted Golden Jazz Record of the Year in 1989 by the readers of the jazz magazine Orkester Journalen, as well as "The Spinning Top" in 1997. 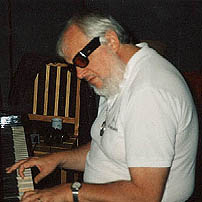